PETERBOROUGH - The lawyer for an Ontario man who kidnapped and sexually assaulted a 12-year-old girl says the unsolved death of another teenager "hangs like a dark cloud" over this case.

A dangerous offender hearing for Stanley Tippett was supposed to start today in Peterborough, Ont., but had to be delayed until Tuesday because of a scheduling mix-up with a Polish interpreter for some of the Crown's witnesses.

Tippett was convicted in 2009 on seven counts relating to the attack a year earlier, including kidnapping, sexual assault and sexual interference.

Before the hearing was adjourned today, Tippett's lawyer Bob Richardson brought to the judge's attention the case of Sharmini Anandavel, a 15-year-old girl whose remains were found four months after she went missing in June 1999.

Tippett was a suspect in the case but never charged, and Richardson said he believes it's one of the reasons the Crown brought a dangerous offender application and is worried it could affect witness testimony.

If the judge decides Tippett is a dangerous offender, he could be jailed indefinitely. 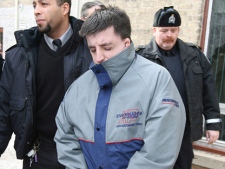 Stanley Tippett leaves the Superior Court of Justice in Peterborough, Ont., Wednesday, Dec. 23, 2009, after being handed a guilty verdict. Tippett was found guilty of kidnapping and sexually assaulting a 12-year-old Peterborough girl. (THE CANADIAN PRESS/Peter Redman)