Conducted exclusively for CP24, CTV and the Globe and Mail, the poll asked people to describe Hudak, McGuinty and NDP Leader Andrea Horwath in one word.

Liberal Leader Dalton McGuinty was equally divisive. He was described as charismatic/good by 18.6 per cent of respondents, but was described as incompetent/awful by 16.7 per cent and untrustworthy/corrupt by 15 per cent. Twenty-two per cent said they were unsure about McGuinty.

"The are still a lot of people that haven't formed opinions of her, so the debate is going to be critical and it is the same for Tim Hudak" Pollster Nik Nanos told CP24 Monday night. "As new leaders challenging an incumbent deffinition is very important, as is profile."

The poll, which surveyed 1,005 random Ontarians between Aug. 30 and Sept. 1 and is accurate to within 3.3 percentage points, 19 times out of 20, was released in three parts.

On Monday, the poll placed the Tories in the lead overall with 35.4 per cent, followed by the Liberals with 31.9 per cent and the NDP at 22.8 per cent. The Green party finished fourth with 4.1 per cent.

In terms of personal popularity, Liberal Leader Dalton McGuinty finished first with 29.7 per cent of respondents saying he would make the best premier. Hudak received 24.7 per cent support while NDP Leader Andrea Horwath had 14.6 per cent and Green Party Leader Mike Schreiner had 2.8 per cent. 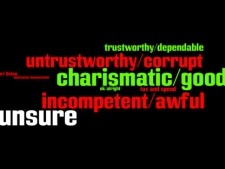 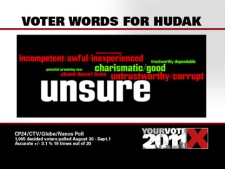 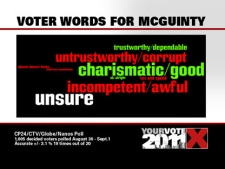 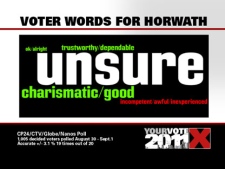 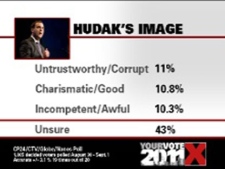