'We literally don't have the money:' concerns mount about tenants with most rent payments due next week 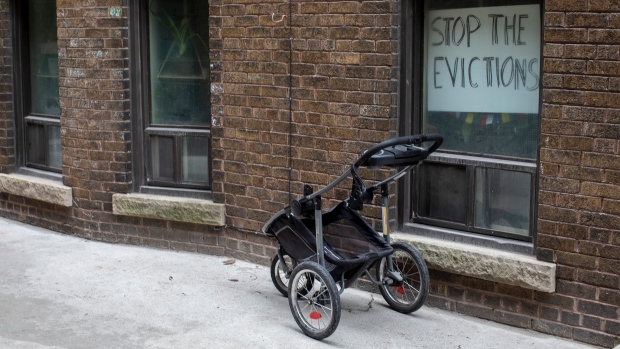 A sign hangs in the window of a west Toronto apartment on Thursday March 19, 2020. THE CANADIAN PRESS/Chris Young

As April 1 draws near and many tenants dealing with a sudden job loss fret over how they will come up with rent there is increasing pressure on various levels of government to act.

On Wednesday the province announced billions of dollars in relief as part of its response to the COVID-19 crisis.

The support includes a one-time, per child payment of $200 for Ontario parents, relief on hydro payments and the deferral of various taxes and fees.

There was, however, no specific relief provided to renters and at least one advocacy organization is now calling for governments to take immediate action to help before it’s too late.

“We saw a lot of things but the rent just wasn’t there. We saw deferred fees, we saw mortgages deferred, property taxes deferred but these are just things that are going to help landlords, they aren’t going to help tenants,” Alejandra Ruiz Vargas, a spokesperson for the tenant advocacy organization ACORN told CP24 on Thursday. “Thousands of renters have been laid off and it is not that we don’t want to pay the rent, it is that we literally don’t have the money to pay the rent. We see these billions going around and we wonder where the money is for renters.”

The federal government has announced a new emergency fund that will provide up to $2,000 a month, for four months, to any worker who may have lost income as a result of the pandemic but Ruiz Vargas pointed out that Canadians won’t even be able to apply for payments from that fund until April 6, which will leave those with rent due on April 1 in a precarious position.

In Ontario, eviction proceedings are currently on hold in light of the crisis but Ruiz Vargas said that renters are still concerned about other consequence they could face in the event that they can’t come up with enough money to cover their expenses.

She said that she is now hearing from concerned renters “daily” who are scared and worried about what will happen next week.

For that reason, her organization is now pushing for other levels of government to come up with a program that would reimburse landlords for tenants who may not be able to make their rent payments over the next two months.

“We are concerned; we are very concerned about the mental health of people,” she said. “We understand that people (who) have the money to pay they should pay the rent but the ones that don’t, we just don’t know what they are going to do.”

Ford says tenants who can’t make rent will be protected

While the province has not provided any direct financial support for renters, it did previously announce that it would stop issuing new eviction orders and halt the enforcement of existing eviction orders indefinitely.

Speaking with reporters from Queen’s Park on Thursday, Premier Doug Ford said that if tenants can’t pay rent due to job loss brought about by the pandemic then they don’t have to.

The British Columbia government has introduced a program where it will directly pay landlords up to $500 a month for four months to offset the cost of rent for tenants who are struggling but on Thursday Ontario’s Finance Minister Rod Phillips that such an initiative wasn’t being considered by his government at this point.

Instead, Phillips said that Ontario is providing numerous “direct supports” to residents, including $20 million in deferred student loan payments, $148 million in funding for shelters and food banks and $100 million in skills training for workers who may have lost their jobs during the pandemic.

“There is a very significant investment that we have made in making sure that people get direct support and that is the way we think at this point we can best support Ontarians,” he said.

‘Landlords have to step up now,’ Tory says

Ruiz Vargas said while protections from evictions and other measures for parents and people with student debt are a start, it doesn’t necessarily make renters any less vulnerable as April 1 approaches, particularly given the affiordability challenges that already exist in Toronto.

For his part, Mayor John Tory said that the city unfortunately can’t do much financially for renters, who he said number in “the hundreds of thousands”

But he did call on landlords to directly communicate with tenants about their willingness to be flexible on April 1 rent payments “today,” something he said that many of them have assured him they are willing to do.

“Look, I am a business guy so for me to sit here and be critical of businesses and the way they have communicated in some instances is hard for me to do but you got to call it the way it is,” he told CP24 earlier in the day. “The landlords have got to step up now, today because we are approaching April 1 and tell the tenants that if you are in trouble because you have lost your job you can come and see us and we will make an arrangement with you and will be pragmatic about your rent payment, maybe stretch it out over several months or defer it.”

Tory pointed out that the city has previously agreed to defer all property tax payments owed to it until June.

He said that he therefor just “doesn’t accept” that landlords don’t have the ability to show some flexibility to tenants in this difficult time.

“I would urge all landlords to look themselves in the eye. Don’t just look at the bottom line but look at people, look at the wellbeing of our city, try to give people a hand just as we are trying to give you a hand,” he said. “I think if everybody did that in a very pragmatic way we would all be better off and there would be a lot less anxious people, at least for April 1.”