We Remember: The sacrifices made

CP24.com readers were asked to share their Remembrance Day stories with us, whether they participated in the war or grew up with a loved one in service. These are their memories and the photos that have defined their experience.

My father, John Joseph Lundy, and his brother William(Bill) Lundy, are shown in uniform, in England in 1942.

My father, age 23 was shipped overseas in 1939, two weeks after he and my mother (Doris) were married. My Dad served in the Postal Corps and his brother Bill, six years younger, was a bombardier with the RCAF. In this picture my father was recovering from surgery, one of many, due to an infection in the mastoid bone behind his right ear, and Bill had gone to see him.

My Dad had 25 operations in total, due to this problem, because of course there were not the antibiotics available then that we have today.

My Uncle Bill's plane took flack over Europe not long after this picture was taken, and they just made it back to England, where it crashed. Bill was the only survivor, although critically injured. My Dad was brought from another hospital to see his brother, and the doctors believed this saved Bill's life -- the shock was mitigated by having Dad with him.

My uncle asked where his mates were and Dad said they were "upstairs", the hospital did not have another floor.

This photo, and others I have, are treasured mementoes of family long gone and missed every day.

My mother lived with Dad's family while he was overseas, and my Mum and Grandmother were receiving telegrams, very frequently, telling them how critical and/or near death, Dad and Bill were. My Dad and his brother suffered ill health for the rest of their lives, Dad died at 64 from lung cancer, Bill was on crutches for the rest of his life and he died at 73.

My Dad never complained and did not like talking about the war, nor did his brothers. My Uncle Vince enlisted when he was 16 and calibrated the big guns, and then, of course, saw the results. He died when he was 50 from cancer.

My Grandmother had six boys and four served in the Armed Forces, three overseas. We as a society, in a free and democratic land, should never forget the sacrifices made by the members of our Armed Forces that have given us this privilege. 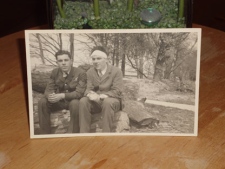 John Joseph Lundy, and his brother William(Bill) Lundy, are shown in uniform, in England in 1942.