A cold snap that brought a teeth-chattering wind chill of -40 is causing major problems for airlines and passengers at Pearson International Airport, where a ground stop halted arrivals for most of the morning Tuesday.

Until the order was lifted at 10 a.m., planes that were heading to Toronto from cities in North America were not allowed to land at Pearson, forcing them to divert or stay put.

The ground stop was ordered because the extreme cold was freezing equipment and posing safety concerns for employees who work outside. When the wind chill hits -40, exposed skin can freeze in five to 10 minutes.

Airlines are urging passengers to check their flight status before heading to the airport because many arrivals and departures are delayed or cancelled.

GTA residents can expect another night of bitterly cold weather, with Environment Canada predicting a wind chill that will linger around -37 into Wednesday morning. A wind chill warning remains in effect for the region and the City of Toronto's extreme cold weather alert is still in place. Metro Hall has been turned into a warming centre.

Earlier at Pearson, hundreds of passengers were forced to spend hours on the tarmac, where there was a backlog of planes waiting for gates to open so passengers could deplane.

Inside the terminals, frustrated passengers encountered long lineups at airline counters and lengthy delays in baggage claim areas, where unclaimed bags occupied much of the floor space around the carousels.

Some customers waited hours to speak to an airline employee about rebooking a flight or obtaining a hotel or food voucher. One man told CP24 reporter Cam Woolley he has been at the airport since Monday afternoon.

Regan Tessis, who spent more than two hours on the tarmac after flying in from warm and sunny Florida, left the airport without her checked luggage because it was still on the plane.

“It was backed up three flights before us and now our flight isn’t even on the board anymore and it’s not attached to any baggage carousel,” Tessis told CP24 before she left the airport.

The situation left her feeling tired and frustrated.

“I just want to get my bag and go home,” Tessis said.

Tessis said an Air Canada employee told her that her bag may remain on the plane until Wednesday morning because luggage handlers are facing a backlog.

Like many passengers, Tessis wound up giving her contact information and address to Air Canada so the airline could send her luggage to her home. She said she was warned that it may take up to a week to arrive.

Because of delays, Sunny Shao’s trip from Vancouver to her Toronto home lasted almost 24 hours.

She boarded an Air Canada plane in Vancouver on Monday at about 10 a.m. local time but had a six-hour stopover in Calgary before landing in Toronto at 1:30 a.m.

She and other passengers didn’t get off the plane until about 4:30 a.m.

“(The pilot) didn’t know what was going on but he would give us what updates that he could,” Shao said. “There were quite a few planes on the tarmac.”

After that long wait, people on the plane were feeling “just like zombies,” Shao told CP24.com.

“Given the time of the day nobody really had any energy and everyone was pretty understanding (of the situation) because there really wasn’t anything that we could do,” Shao said.

Once she entered Terminal 1, Shao was forced to wait a few more hours to collect her luggage.

“I just didn’t think it would get this bad. It just feels like I’m used to living at the airport,” she said as she waited.

Police called in to calm people down

Despite the sea of frustrated passengers, things were mostly calm. Peel Regional Police were called in for crowd control when things got heated at one point and officers went onto at least one plane to deal with an unruly passenger.

Shortly before 5:30 a.m., about 300 people were getting irate over the delay at a Terminal 3 baggage carousel, said police spokeswoman Const. Lilly Fitzpatrick.

Five officers went to the airport to speak to people and calm them down.

The officers were there for more than two hours to help people to get around and answer their questions, Fitzpatrick said.

Earlier in the morning, officers helped with crowd control at Terminal 1.

The situation led some to take out their frustration on airport or airline employees, while others questioned whether the mess could have been avoided.

In a tweet, NDP MP Olivia Chow was critical of the way the Greater Toronto Airports Authority handled the situation.

"Surely the Greater Toronto Airport Authority saw the weather forecast and have a plan? This performance is not acceptable," wrote Chow, the party's transport critic.

In a second tweet, Chow wrote: "How does Winnipeg airport manage it? Their average winter temperature is -23 C. Flight from Thunder Bay landed there w no problem. #GTAA"

GTAA spokeswoman Shereen Daghstani said the airport was prepared but it opted for a ground stop to protect workers from the cold.

“We are prepared. We’re all hands on deck with our winter operations,” Daghstani told CP24.

The weather-related problems aren’t limited to Toronto. Flights were cancelled or delayed at airports in Montreal, Ottawa and northeastern U.S. cities.

Similar problems occurred at Pearson on Monday, when hundreds of passengers were stranded on the tarmac for hours, baggage piled up and dozens of flights were cancelled or delayed.

For at least the second time in a week, the cold caused problems for the TTC's aging streetcars.

Streetcar riders were told to expect delays on all routes because the cold froze switches at both yards, preventing streetcars from rolling out on time.

The cold also froze air lines on some streetcars.

According to TTC Spokesperson Brad Ross, the TTC will be short about 35 streetcars for the evening commute and will bring in 10 buses to help supplement streetcar service along King Street.

In addition to the cold temperatures, heavy winds have also been reported throughout the region, with gusts of up to 60 kilometres-per-hour in some areas.

The winds resulted in at least one major highway closure Tuesday afternoon as Ontario Provincial Police shutdown Highway 400 in both directions between Waubaushene and Noelville due to “blinding whiteouts.”

Because of the extreme cold, many school boards, including Toronto public and Catholic, cancelled school buses out of concerns for student safety.

West and north of the GTA, schools were closed in communities where blowing snow was limiting visibility and making roads nearly impassable. Blizzard or snow squall warnings were issued for some regions. 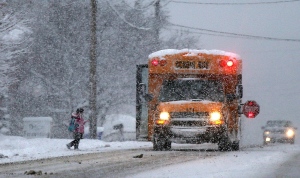 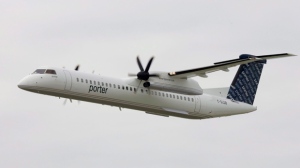 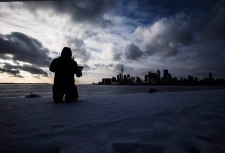 Joanna Leung takes pictures of the skyline and a frozen Lake Ontario during sub-freezing weather in Toronto on Tuesday, Jan. 7, 2014. (The Canadian Press/Mark Blinch)

A pedestrian braves the cold in Toronto during a cold snap across southern Ontario on Tuesday, Jan. 7, 2014. ( The Canadian Press/Aaron Vincent Elkaim) 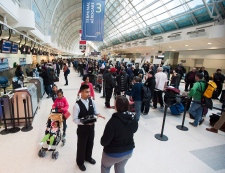