First snow of winter storm arrives in the city

As the first snow of what is expected to be a mammoth winter storm arrives in the region, crews have already begun working on the cleanup.

As of 10:30 p.m. Thursday night, snowplows were already out on GTA highways working to keep conditions safe for the upcoming morning commute.

To see some photos of the storm submitted by CP24 viewers, click here.

Environment Canada is predicting up to 25 centimetres of snow between Thursday and Friday nights throughout southern Ontario, with the heaviest snowfall expected at around rush hour Friday morning.

Toronto is expected to receive up to 15 cm of snow by Friday morning but an additional 10 cm could fall throughout the day.

The City of Toronto issued an extreme weather alert in advance of the storm and shelter employees are encouraging homeless people to spend the night in a shelter.

Despite the expected dumping of the white stuff, the city says crews are ready to handle the challenge.

“We prepare for this all year long and we are excited to actually activate,” Director of Transportation Services Peter Noehammer told CP24 Thursday afternoon. “We have 200 salters, 600 plows and 300 sidewalk machines ready to go, we have actually done salting already and as soon as that snow starts to accumulate, we will be out there.”

After clearing expressways and main roads, trucks will clear local roads if the city receives at least eight cm of snow accumulation. Normally, local road plowing is completed 14 to 16 hours after a storm has passed.

The city says it will clear snow from sidewalks on local roads where it is mechanically possible if there is at least five cm of snow accumulation.

In the central core of the city, property owners are required to clear their sidewalks within 12 hours of a storm.

“Just be safe. Leave yourself lots of extra time, avoid any unnecessary travel and take public transit if you can,” Noehammer said Thursday.

According to Environment Canada, the heaviest snow is expected to occur along the Highway 401 corridor from London to the GTA, so motorists should be prepared for hazardous driving conditions, including poor visibility in blowing snow, if they venture onto the roads.

Storm a 'cowboy kind of an event'

David Phillips, a senior climatologist with Environment Canada, said the province is getting hit by two weather systems - an Alberta clipper and a Texas low - at once.

“It’s really a double whammy,” Phillips told CP24 on Thursday morning. “It’s a real cowboy kind of an event for us.”

Snowfall amounts will likely range between 15 and 25 cm, but some regions along Lake Ontario may receive more than that because of lake-effect snow, Phillips warned.

Phillips said the storm will affect a region from Owen Sound to Kingston and south to London and Niagara Region.

If the forecast is accurate, Toronto may receive its largest individual snowfall in almost half a decade.

The last time Toronto has had a single snowfall of more than 16 cm was Dec. 19, 2008, so people should be prepared to grab a shovel, Phillips said.

“We’re maybe a little out of shape and we’ll put our muscles into good use digging out of this particular one,” Phillips said.

Meanwhile, police are reminding people to drive with caution during the storm, but they also urged people not to drive if they don't have to.

Motorists should slow down, leave extra room between vehicles in case they are forced to come to a sudden stop, and be prepared for delays because the snow will likely create a slow commute, police said.

Once the storm passes, it appears the GTA is in for a decent weekend.

People who live in the northeastern U.S. states may not be as fortunate, however.

After the storm leaves a blanket of snow in southern Ontario, it is expected to merge with a weather disturbance along the Atlantic coast and dump as much as 60 cm of snow in New England, Phillips said.

Phillips described it as a "classic" nor'easter with blizzard conditions. 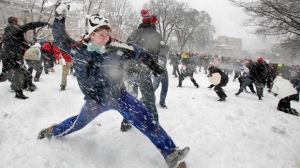 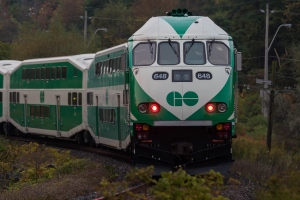 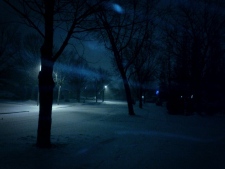 Snow is seen blanketing a street in Mississauga on Thursday, Feb. 7, 2013. (Michelle Martin)