Severe thunderstorm watch in effect for Toronto, parts of GTA

Toronto and much of the Greater Toronto Area remains under a severe thunderstorm watch as an intense weather system moves across southern Ontario.

For the second day in a row, a flurry of tornado warnings from Environment Canada were issued for areas of cottage country and much of southern Ontario, including Barrie, Orillia, Innisfil, Hamilton, St. Catharines, Niagara Falls, Mississauga and Oakville, to name just a few.

All tornado warnings issued for southern Ontario were ended shortly after 8 p.m.

As the system moves rapidly to the east, the risk of thunderstorms in the region will remain throughout the rest of the evening, CP24 meteorologist Chris Potter said.

As of 10:15 p.m., Hydro One was reporting about 156,000 customers were without power in central and northeastern Ontario.

Locally, as of 10 p.m., approximately 7,000 customers were without power in the city, Toronto Hydro said.

The heaviest hit areas are Etobicoke and Midtown.

Downed trees and power lines have been reported throughout the city and surrounding area.

Residents in Toronto can report any issues to the city by calling 311.

The thunderstorms came as Ontarians sweltered in the heat for the fourth day in a row.

The heat wave is expected to end when cooler and drier air moves in from the north Friday night, giving residents some relief from the searing heat and humidity.

Toronto hit a sweltering high of 34 C on Friday but it felt more like 43 with the humidity.

Some thunderstorms may carry over into Saturday morning, as the weather returns to or just below seasonal.

Normal temperatures for this time of year are highs of 26 C and lows of 15 C.

Toronto’s first official heat wave of 2013 was declared Thursday when the temperature eclipsed 32 C for the third consecutive day.

The following cooling centres are open to the public until Toronto Public Health calls off its extreme heat alert:

People can also cool off in shopping centres and public libraries.

Though city-run pools had remained open late into the night the last few days, officials said Friday swimming pools would close at the regular scheduled time because of the threat of thunderstorms. 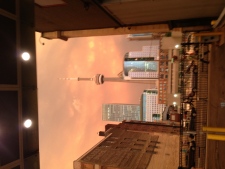 The CN Tower is visible in downtown Toronto following a storm on Friday, July 19, 2013. (CP24/Kyle Christie) 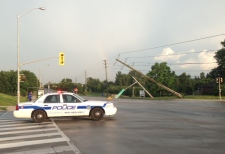 Toppled hydro poles are seen in this photograph taken at McLaughlin Road and Williams Parkway in Brampton on Friday, July 19, 2013. (CP24/Cristina Tenaglia)

Storm clouds are visible from a balcony at Front and Lower Jarvis streets in this picture taken on Friday, July 19, 2013. (CP24/Sarah Tratt)

A @CP24 Twitter follower took a photo of a broken tree in Orillia after a heavy storm on Friday, July 19, 2013. A tornado warning had been issued for the area. (@Robertobg68/Twitter)