In its advisory, the weather agency said thunderstorms ahead of a cold front are forecast to pass through the region.

“Wind gusts of 70 km/h, brief torrential downpours, and cloud-to-ground lightning will be associated with some of these storms,” Environment Canada said in the advisory.

Most areas in the GTA were also under a special weather statement. The advisory was lifted after 9 p.m.

And then the torrential down pour in Penetanguishene ON @weathernetwork @CTVNews @CP24 @globalnews #justwow pic.twitter.com/8yxrrLpdKd

Environment Canada said they were tracking a severe thunderstorm that could possibly produce a tornado.

“This is a dangerous and potentially life-threatening situation,” the weather agency said in its advisory. 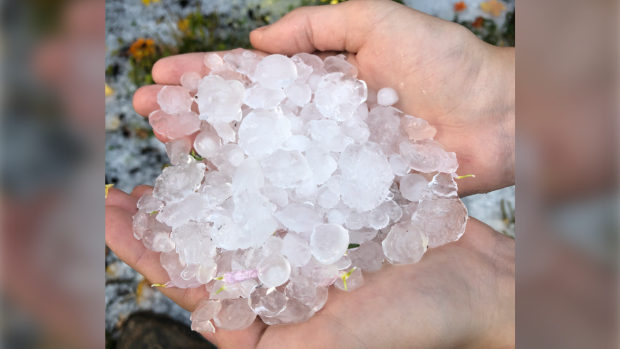 Residents of those areas reported heavy downpour and large hail.

Just before 6 p.m., all tornado warnings have ended.

Environment Canada reported potential tornadoes in some parts of the region. However, there are no confirmed tornadoes that have touched down at this time.

For the weekend, it will be mainly cloudy in Toronto with a 30 per cent chance of showers on Saturday morning.

After reaching 24 C on Friday, the temperature will only climb to a high of 8 C this weekend.

It will be cloudy on Sunday with a 60 per cent chance of showers in the evening.