This week's record-breaking winter weather not sticking around: Environment Canada 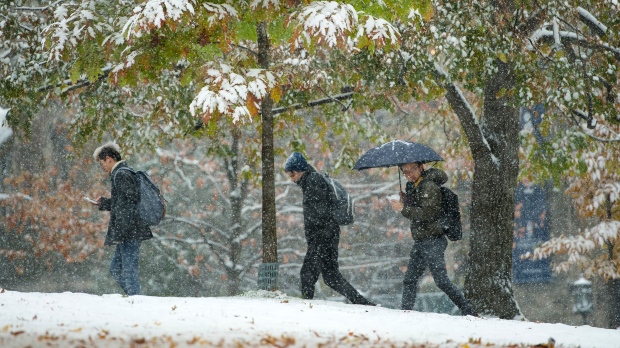 People make their way through the snow at the University of Toronto's campus in Toronto on Monday, November 11, 2019. THE CANADIAN PRESS/Nathan Denette

The record-breaking cold and snow that ambushed Torontonians this week is not a sign of things to come, Environment Canada’s Senior Climatologist Dave Phillips says.

Monday marked Toronto’s snowiest Nov. 11 on record, with about 13 centimetres of accumulation.

The heavy snowfall was followed record-breaking cold in Toronto on Tuesday and Wednesday.

“It is hard to break records in Toronto. We have records that go back 180 years,” Phillips said during an interview with CP24 on Wednesday.

“These are temperatures in the dead of winter, not six weeks before winter is officially supposed to be underway.”

Phillips said the premature blast of winter weather “was a real shock to the system” for many in the province.

“This is really a slap in the face for people in Ontario,” he said. “A lot people were still getting the garden furniture away.”

Phillips described the snow and frigid temperatures as a “bit of a hit-and-run.”

“(On) the weekend, we are going to be seeing temperatures that are more seasonable, which is about six or seven degrees,” he said.

He also noted that the early start to winter is not an indicator of any type of long-term trend.

“There is no correlation to an early start to winter, whether it is snow or the cold, and the length of winter or the intensity of winter,” he said. “We don’t think it is going to be as long as last year.”