Toronto Public Health has issued a heat alert ahead of what could be the hottest day of the year.

According to Environment Canada, the temperature will hit 30 C today but it will feel closer to 38 C with the humidity factored in.

The temperature isn’t expected to ease up anytime soon either.

The weather agency is forecasting a high of 32 C on Sunday and is warning that it will feel closer to 39 C with the humidity.

During the heat alert residents are advised to drink plenty of fluids and check in on friends, neighbours and family members who are at risk from heat-related illnesses, such as the elderly or those with medical conditions.

Police are also warning people not to leave their pets or children in their parked vehicle.

"Even if you are going into a service centre or something just for a few minutes do not leave your dogs, pets or children in the vehicle," OPP Sgt. Kerry Schmidt told CP24 on Saturday. "It can turn into a little sauna in there and very quickly you can get overheated, dehydrated and you can go into distress."

This weekend is set to become the first one in three years in which the daytime highs on both Saturday and Sunday top 30 C. The last time that happened was July 14 and July 15, 2012 when the mercury hit 30.8 C and 31.4 C respectively.

With the hot weather coming as thousands of athletes take part in the Pan American Games, officials are warning both athletes and spectators to watch out for signs of overheating.

Already, two competitors in the marathon have been treated for heat-related illness, according to the Chief Medical Officer with the games.

“We had two people transported from the marathon venue with early signs of dehydration. One had muscle cramps and was treated with some oral fluids while the other needed some IV fluids and is responding well,” Dr. Julia Alleyne told CP24. “Neither will go to the hospital. We have treated them here in the village.”

Alleyne said that extra medical staff have been stationed at Pan Am Games venues due to the heat.

Athletes are also being reminded to consumer additional fluids and to keep their skin surfaces cool by splashing water or themselves and taking breaks in the shade when possible.

"At this point we are treating on venue with prevention strategies," Alleyne said.

This is the first heat alert issued by the City of Toronto since last September.

The city's 24-hour cooling centres are only opened in the event of a extreme heat alert, which is usually issued when the temperature surpasses 31 C for three consecutive days.

For further information about when the city issues heat alerts follow this link. 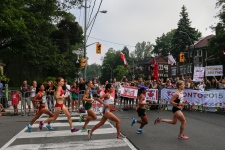