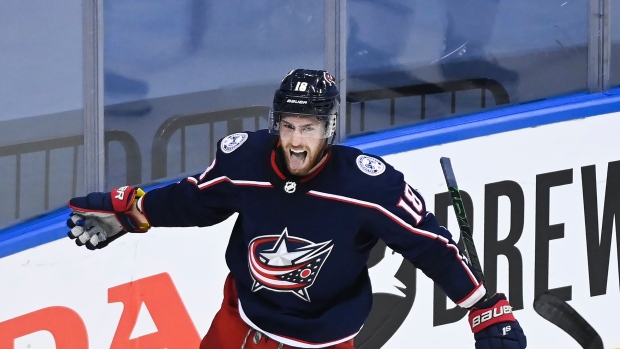 The Columbus Blue Jackets have granted Pierre-Luc Dubois' request for a trade.

Columbus sent the forward and a 2022 third-round pick to the Winnipeg Jets for forwards Patrik Laine and Jack Roslovic. The Jets will also retain 26 per cent of Laine's reported $7.5-million salary.

Dubois, 22, had a goal in five games this season after leading Columbus last year in points (49) and assists (31). The 22-year-old native of Ste-Agathe-des-Monts, Que., had asked to be traded earlier this year.

Dubois had a solid 2018-19 campaign, registering a career-best 27 goals and 61 points in 82 regular-season contests. He was the third player taken in the 2016 NHL draft.

Dubois' father, Eric, is an assistant coach with the Manitoba Moose, the Jets AHL affiliate.

Laine, 22, scored twice and had three points in Winnipeg's season-opening 4-3 overtime win over Calgary. But he's missed the last three games with an upper-body injury and was placed on injured reserve Friday.

"Strengthening our lineup offensively has been a priority for us and the additions of Patrik Laine and Jack Roslovic accomplish just that," Columbus GM Jarmo Kekalainen said in a statement. "Patrik is a player we know very well and in a short time has become one of our league's most proficient goal scorers.

"Jack is an exciting young player with great potential and we're thrilled to bring him home to Columbus as a Blue Jacket."

This report by The Canadian Press was first published Jan. 23, 2021.