A urinal shaped like a woman's wide-open mouth has been flushed out of the men's room of a Hamilton eatery following a nearly year-long public outcry.

Some people argued the "Kisses! urinal" -- manufactured by Bathroom Mania! in the Netherlands -- was art or just a joke.

The Woman Abuse Working Group, a coalition of 24 organizations, disagreed and led efforts to oust what it considered to be an offensive water closet.

Lenore Lukasik-Foss, chairwoman of the group, said Monday she's "shocked, excited and thrilled" that it's gone.

The group was concerned about women's safety and the message the urinal, which had been there since the restaurant opened in February 2007, sent to men in the bar.

"They're drinking and maybe hoping to connect with a special person and then they're going to the bathroom and peeing into a woman's mouth," said Lukasik-Foss, who's also director of the Sex Assault Centre.

"Granted it's sort of a cartoonish version, but still it's clearly a woman's mouth."

Ontario NDP Leader Andrea Horwath, who had sent a letter to owner Greg Sandwell asking him to consider the outcry from women's groups, said she was pleased it had been removed.

"It was something that was causing a great deal of concern around the Hamilton area," said Horwath, who represents the riding in which the restaurant is located.

"I've been to the Honest Lawyer with many different people, including men, and nobody ever gave me the heads up."

On its website, the manufacturer says "'Kisses!' transforms a daily event into a blushing experience."

It also adds: "This is one target men will never miss."

While the designer defends the urinals as sensual art, a customer complaint led a McDonald's outlet in Amsterdam to remove them in 2006. The fixtures were also removed from a public washroom near Austria's national opera in Vienna in 2006 after complaints from politicians.

Virgin Airways apologized and ditched plans to install a pair at its lounge at New York's John F. Kennedy airport in 2004 after the National Organization for Women called them "degrading."

Meike van Schijndel said in an email from Holland that she devised the design for an art school project, and lots of men and women like the "cartoonish looking mouth."

"The thought that this urinal only represents a man peeing in a woman's mouth never even occurred to me while making it," said van Schijndel.

"Luckily for all those women who feel offended, they will never run into a 'Kisses' at a restroom." 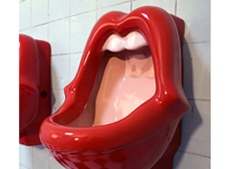 Image of Kisses! urinal courtesy of the Bathroom-mania website.