TORONTO - Construction has started on a security fence in preparation for the G20 summit in Toronto later this month.

Workers began laying down concrete bases today for a fence to encircle an area around the Metro Toronto Convention Centre.

Government leaders and the finance ministers of the world's wealthiest countries will gather there June 26th and 27th.

Officials say the fence will stand about 2.5 metres tall and construction will continue night and day until it's complete.

Only those with proper photo identification will be allowed to enter the fenced-off area.

A second security zone, described as a traffic perimeter with police checkpoints, will be set up on surrounding streets. 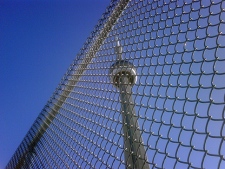 Crews have been working to build fences around the G20 summit site. (CP24/Mathew Reid)