TORONTO - With hundreds of reporters from around the world in Ontario to cover the G8 and G20 summits, the average Canadian might wonder: What are they saying about us?

While the majority are focused on the key issues brought up by their own leaders, it's inevitable a little commentary on the host country sneaks into media reports.

In the English media at least, it looks like the Brits want to be more like the Canadians, on the subcontinent the Indians are awed by fortress Toronto and the Americans, well, they're just taking it all in.

The BBC's Caroline Hepker raised the profile of the Canadian economy across the Atlantic with a piece headlined "Why we all want to be Canadian now."

While examining the country's banking system, its rules on mortgages Hepker even manages to throw in a maple syrup mention as she explains how the G8 and G20 summits are a crucial opportunity for Canadian policy makers.

"The Canadians, it seems, have answers for even the toughest puzzles and they are keen to share their strategies with the rest of the world," she writes. "Why in this economy, we all want to be Canadian."

Media south of the border aren't quite as eager to imitate us, but have no qualms making quirky observations.

Reporting from G8 summit in Huntsville, Ont., Ian Austen of the New York Times noted that for all its heart-fluttering preparations, the picturesque cottage-country community was "stood up" by world leaders.

Austen notes the lengths to which the town was beautified only to have its moment in the spotlight overshadowed by Toronto, of course.

"The leaders of the world's wealthiest nations spoiled the fun," he wrote.

"They decided that the Group of 20 meeting would replace the Group of 8 as their flagship economic summit meeting. And what was supposed to be Huntsville's moment of glory is increasingly becoming a minor national scandal."

In a separate piece, the New York Times also focused on the special powers granted to police in Toronto for summit security.

The previously little-known law allows police to stop and search anyone coming within five metres of the G20 summit site's security fence and allows cops to make arrests if identification isn't provided.

"Canadians discovered Friday that the Group of 20 summit meeting in Toronto has brought not only world leaders but also a temporary suspension of some of their own civil rights, at least in the core of downtown Toronto," Austen wrote.

Meanwhile, for the Indian media, nearly all mentions of the G20 summit alluded to the stringent security measures that has the city's core under virtual lockdown.

The Hindu newspaper made reference to "unprecedented security" while the Times of India noted at great length the "deserted look" of Canada's largest city before the summits.

"But people or the media are not pleased," wrote the Times. "More so after the huge $1.2 billion tab that the taxpayers will be picking up for the two summits."

Some members of the Russia media also weighed in on summit security, particularly the cost.

News agency Ria Novosti notes that the 2009 U.S. G20 summit cost US$18 million, while Canada's pricetag for the meetings was well over $1.1 billion.

"Thus Canada will spend 51 times more than the US did just a year ago to protect G8 leaders from Canadians," the agency writes.

"Canada must be a very dangerous country for world leaders."

Of course, no coverage of the summit would be complete without mention of the body of water that sent a tsunami of dissent across the country in the leadup to the summit.

Harper's now famous $57,000 "fake lake" was too good a story for international media to pass up.

One of the best quips comes from a Reuters blog by reporter Robert Basler.

"Everybody is now doing extra stories about the stupid 'fake lake,"' he wrote. 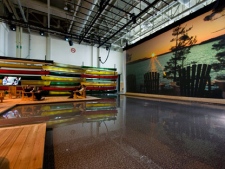 People check out the fake lake at the G20 media centre in Toronto, on Wednesday June 23, 2010. The lake is part of a display promoting Ontario's Muskoka region. (THE CANADIAN PRESS/Adrien Veczan)