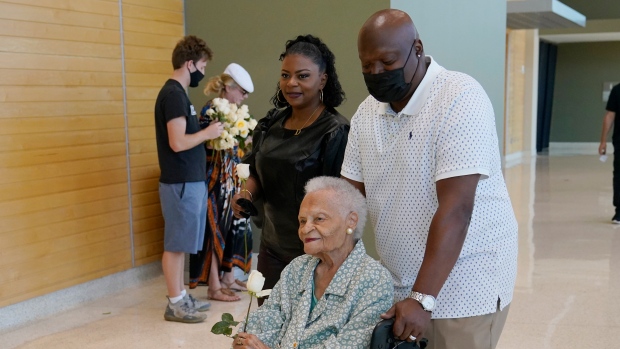 Viola Fletcher, center, the oldest living survivor of the Tulsa race massacre, holds a rose she received as she arrives for a luncheon honoring survivors Saturday, May 29, 2021, in Tulsa, Okla. (AP Photo/Sue Ogrocki)

TULSA, Okla. (AP) - There's been undeniable progress in the relationship between the Tulsa police and the city's Black community in the past 100 years. Then again, it's hard to imagine it could have gotten worse.

Complaints about police bias and a lack of enough minority officers remain. But the police chief is now a Black man from north Tulsa, the area that includes what once was America's wealthiest Black business district.

Back in 1921 - decades before the civil rights movement - even the thought of a Black police chief would have been inconceivable. That year, Greenwood - the Black north Tulsa neighborhood that includes the area known as Black Wall Street - was burned to the ground with assistance from the virtually all-white Tulsa Police Department. Sparked by accusations that a 19-year-old Black man had assaulted a 17-year-old white girl in an elevator, the Tulsa Race Massacre left as many as 300 Black people dead and thousands of Black residents displaced. Thirty-five square blocks were torched and damages spiraled into the millions.

Tulsa's police department deputized white mobs and provided them with arms. Numerous reports describe white men with badges setting fires and shooting Black people as part of the Greenwood invasion. According to an Associated Press article from the time, Black people who were driven from their homes by the hundreds shouted, “Don't shoot!” as they rushed through the flames.

After the massacre went largely ignored for decades, awareness has increased in recent years. Police Chief Chuck Jordan stood in Greenwood in 2013 and apologized for the department's role.

“I can't apologize for the actions, inaction or derelictions of those individual officers and their chief,” Jordan said. “But as your chief today, I can apologize for our police department. I am sorry and distressed that the Tulsa Police Department did not protect its citizens during the tragic days in 1921.”

The appointment of Wendell Franklin to succeed Jordan last year is seen by some as a measure of progress. But Black Tulsans say that's not enough.

“I think it's something that the community needs to see,” said Ina Sharon Mitchell, a 70-year-old woman who was raised in north Tulsa. “But how far does that change really go when the doors are closed?”

In 2016, then-Tulsa police officer Betty Shelby shot and killed Terence Crutcher, an unarmed Black man. Shelby - a white woman - was acquitted of manslaughter. She was reassigned in the department before resigning. For Black Tulsans who grew up learning what happened in Greenwood, Crutcher's killing brought old pain back to the surface.

“I believe that my brother's killing really unearthed a century of racial tension here in Tulsa, Oklahoma,” said Tiffany Crutcher, Terence Crutcher's twin sister who is also organizing commemoration events for the anniversary of the massacre.

Crutcher said the relationship between Tulsa's police and the community is still strained.

“Here in Tulsa, explicitly and specifically, there's not a really good relationship between law enforcement and the Black community, Black and brown communities,” she said. “The relationship isn't good at all. There's no trust there.”

Crutcher started the Terence Crutcher Foundation with a goal to bridge the fear and mistrust between Black communities and law enforcement. She is frustrated with the lack of progress in Tulsa and is especially disappointed in Franklin.

“This is someone who doesn't believe - someone who looks like me - that the Tulsa Police Department has a problem with racially biased policing,” she said.

“He says the problem doesn't exist. So for me, I don't care what color you are, but if you have a track record in building relationships with the community and doing what's fair in community policing, then I can deal with you. Putting someone in that position that looks like us is just a shallow act of putting lipstick on a pig.”

Franklin did not respond to several interview requests. During his tenure, he has said police need better training in dealing with the public. But he also testified before an Oklahoma legislative panel after 2020's nationwide protests over racial bias in policing that recruiting new officers is difficult because of growing anti-law enforcement public sentiment.

“Quite frankly, who would want to come do this job with everything placed upon us,” he said.

Greg Robinson, the 31-year-old founding organizer of Demanding a JUSTulsa and Director of Family and Community Ownership at Met Cares Foundation, said there's a lack of transparency from the Tulsa Police Department.

“I think the main problem is there is not a system of citizen oversight or accountability,” he said. “I think that's really where we're falling down. It's not that all police are bad because they're not. But everybody in our community isn't a criminal, either. And sometimes, it feels like we get policed like that.”

Mitchell said back in the 1950s and 1960s, there were more Black officers, and that fostered the feeling of a partnership. It's different now - in 2019, according to the department's annual report, 8.4% of employees were Black, compared to 15.1% of the city's overall population.

“When I was a child and raised up, most of the police officers looked like me,” she said. “They lived in the community, so the relationship of the Police Department and the community was one-on-one. They knew the children. They knew the schools they went to. Now, you don't have that.”

Robinson, who also is a board member for the Terence Crutcher Foundation, remains hopeful that change can occur. He believes it ideally would start with outreach from the police and local oversight and inclusion from the Black community. The fact that Franklin is from the neighborhood helps Robinson remain optimistic.

“I hope that through his tenure he can really begin to inject, gauge the community around the changes that we have been advocating for,” Robinson said. “So far, it hasn't happened, but certainly, he is somebody who grew up out north. He should understand it. And I would hope that he would be courageous enough to really include us and involve us.”

Crutcher has taken her fight beyond Oklahoma. She said some of her recommendations are included in the George Floyd Justice in Policing Act that is under consideration. She said she was in Washington this spring with the family of Floyd, who was killed by police last year in Minneapolis, and relatives of Botham Jean and Eric Garner, who also died at the hands of police, pushing for the bill.

She said her brother told her in their last conversation that he was going to make her proud, and that “God is going to get the glory out of my life.”

“I believe that the work that I've done - this righteous fight - the fact that we're at the precipice of some type of change - is living proof of Terence's last statement to me,” she said. “But we have so much work to do.”