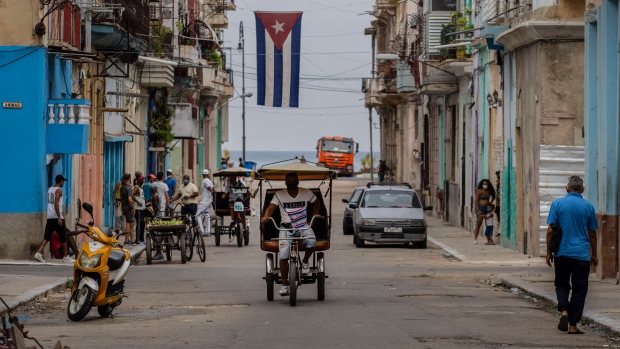 A man rides a pedicab through the streets of Havana, Cuba, Monday, July 26, 2021 (AP Photo/Eliana Aponte)

MEXICO CITY (AP) - Two Mexican ships carrying food, fuel and medical supplies were sailing to Cuba on Tuesday and a third was getting ready to head there Wednesday, in what experts said was Mexico's biggest aid run for Cuba in almost three decades.

The first ship left late Monday loaded with 100,000 barrels of diesel fuel that the Mexican government said would be used to provide power for Cuban hospitals.

A second ship operated by the Mexican navy left Tuesday, and the third ship will leave Wednesday. The Foreign Relations Department said those two ships are carrying oxygen tanks, needles and syringes as well as basic food items like powdered milk, cooking oil and beans.

The department described the shipments as “humanitarian assistance” to help Cuba weather the coronavirus pandemic.

Rafael Elias Rojas, a Cuban historian and professor at the College of Mexico, said that “this is a new phenomenon,” comparable only to Cuba's “special period” in the early 1990s after the collapse of the Soviet Union cut off the island's economic subsidies.

“There have been minor instances of aid during hurricane seasons, but the last big aid efforts of this scale or larger, were during the administration of (former Mexican president) Carlos Salinas de Gortari, when exchanges with Cuba increased significantly and when, as now, there was a deep economic crisis on the island,” Rojas said.

Carlos Salinas de Gortari governed from 1988 to 1994. And until Mexico's democratic transition in 2000, Mexico's old ruling Institutional Revolutionary Party had a longstanding policy of opposing U.S. interference in Cuba, in part because Mexico feared outside criticism of its own less-than-democratic regime.

Lorena Ruano, a professor at Mexico's Center for Economic Research and Teaching, said Mexico's policy was “to defend the sovereignty of other countries, so that 'others won't criticize me.”'

President Andres Manuel Lopez Obrador is a fervent believer in that old policy, and last week he called Cuba an “example of resistance” and proposed that the entire country be declared a World Heritage site.

While much of Cuba seems stuck technologically in the middle of the last century, Lopez Obrador did not appear to be speaking ironically when he proposed the world heritage designation, which is usually used by the United Nations to honor historical sites.

Lopez Obrador praised Cuba's ability to stand up to U.S. hostility since 1959, but did not mention recent street protests that were violently repressed by the Cuban government.

Lopez Obrador has in the past stated his opposition to U.S. sanctions that limit commerce with the island, and said they should be ended.

On Thursday, the U.S. government tightened the sanctions on some Cuban officials over the suppression of the rare street protests earlier this month. The new sanctions target a Cuban official and a government special brigade that the United States says was involved in human rights abuses during the government crackdown.

People walk on the street with graffiti that commemorates the 68th anniversary of the July 26, 1953, attack by Fidel and Raul Castro on the Moncada military barracks, in Havana, Cuba, Monday, July 26, 2021 (AP Photo/Eliana Aponte)