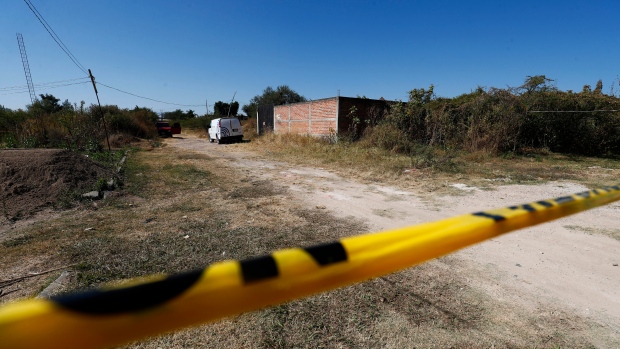 Police tape cordons off the area where authorities search for bodies in El Salto, outside metropolitan area of Guadalajara, Jalisco state in this file photo from Monday, Nov. 23, 2020. (AP Photo/Refugio Ruiz)

MEXICO CITY (AP) - Authorities in the western Mexico state of Jalisco are investigating whether the abduction and killing of three siblings could have been a case of mistaken identity.

The abductions came as hundreds of people fled villages in the northern part of Jalisco to escape shootouts between drug gangs, and thousands of white-clad demonstrators marched through the state capital, Guadalajara, to protest the killings of the three young people.

The three were kidnapped Friday night, when a group of armed men wearing tactical vests with the initials of the Jalisco New Generation Cartel snatched the siblings from their home in the Guadalajara suburb of Tlaquepaque, Jalisco state prosecutor Gerardo Octavio Solis Gomez said Monday.

Their bodies were found bundled in bedding and dumped on the side of highway outside Guadalajara on Sunday morning. A message left by the cartel with the bodies included a warning to the government.

The abduction came only a short time after agents from the federal Attorney General's Office came under attack while escorting an individual, Solis Gomez said. That individual, whom authorities did not identify, lived on the same street as the abducted siblings.

The federal agents and the other person survived because they were traveling in an armored van, Solis Gomez said at a news conference.

Solis Gomez said authorities also are investigating whether the siblings were directly targeted.

“We know that these organized crime groups have to act fast and there's always a chance that they made a mistake,” he said.

He said it did not appear to be a ransom attempt, because there was never any attempt to contact their family. Local press reported the victims as being in their 20s and 30s.

The killings caused outrage among students in Guadalajara, many of whom joined the protest march Tuesday to demand justice in the case. Wearing white, the protesters lit candles as a way to remember the thousands killed or disappeared in Jalisco after years of gang-fueled violence.

The Jaslico cartel, based in the state, is one of Mexico's most powerful and has a reputation for extreme violence. It is currently fighting one of its own break-away factions in Guadalajara.

Last June, the Jalisco cartel wounded Mexico City's police chief in a brazen attack on his armored vehicle on his way to work.

Farther north, near Jalisco's border with the neighboring state of Zacatecas, the Jalisco state human rights commission said Monday that about 600 residents fled their villages after gun battles broke out between rival gangs.

The area has been plagued by turf battles between the Jalisco cartel and the rival Sinaloa cartel, but it came to a head Friday when gunmen armed with assault rifles and home-made armored cars battled in the border region.

“The confrontations between criminal groups have shattered this town's peace,” Alfaro said.

The situation got so bad that the local priest, Rev. Manuel Sandate, was leading near daily prayers for peace. Many of the villagers have gone to live with relatives.

The rights commission said that if a solution to the violence wasn't found soon, the villagers risked becoming displaced people who might need housing and food support.