4 charged in downing of Malaysian airliner over Ukraine 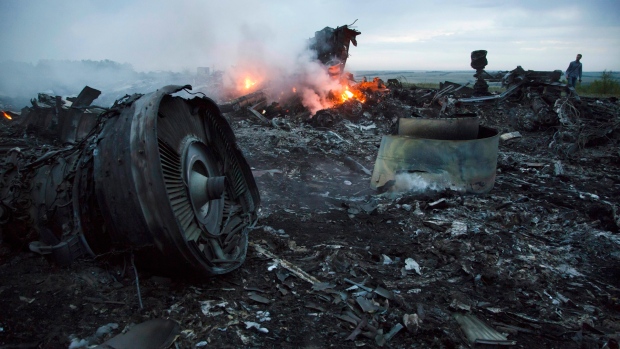 In this Thursday, July 17, 2014 file photo, a man walks amongst the debris at the crash site of a passenger plane near the village of Hrabove, Ukraine. An international team of investigators building a criminal case against those responsible in the downing of Malaysia Airlines Flight 17 is set to announce progress in the probe on Wednesday June 19, 2019, nearly five years after the plane was blown out of the sky above conflict-torn eastern Ukraine. (AP Photo/Dmitry Lovetsky, File)

NIEUWEGEIN, Netherlands - International prosecutors announced murder charges Wednesday against four men - three of them Russians with military or intelligence backgrounds - in the missile attack that blew a Malaysia Airlines jet out of the sky over Ukraine five years ago, killing all 298 people aboard.

The case, built with the help of wiretaps, radar images and social media posts, marks the most significant step yet toward tying the tragedy to Moscow, which has backed the pro-Russian separatists fighting to seize control of eastern Ukraine.

In announcing the charges, prosecutors appealed for witnesses to help lead them even further up the chain of command in President Vladimir Putin's Russia.

Investigators “want to go as far as we can get” because “it's important to know who can be held responsible for this absolute tragedy,” top Dutch prosecutor Fred Westerbeke said.

The trial for the defendants, who also include a Ukrainian separatist fighter, was set for next March in the Netherlands, though it appeared unlikely any of them would be brought before the court, since Russia and Ukraine forbid the extradition of their citizens.

Russia's Foreign Ministry called the charges against the country's citizens “absolutely unfounded” and accused the investigators of using “dubious sources of information” and ignoring evidence provided by Moscow in order to discredit Russia.

It said, too, that the international team turned a blind eye to Ukraine's failure to close its airspace to commercial flights despite the fighting that endangered aircraft.

Malaysia Airlines Flight 17 from Amsterdam to Kuala Lumpur was brought down on July 17, 2014, over eastern Ukraine by what investigators said was a Buk missile from a Russian anti-aircraft unit. Investigators believe the Ukrainian rebels probably mistook the Boeing 777 passenger jet for a Ukrainian military plane.

Russia has repeatedly denied involvement in the attack, but eastern Ukraine's pro-Moscow rebels have relied heavily on Russian military assistance during the separatist conflict that erupted in April 2014 and has claimed more than 13,000 lives.

Associated Press reporters spotted a Buk, an unusually big and sophisticated type of weapon, in the Ukrainian town of Snizhne just hours before the jetliner was shot down, raining debris and bodies down onto farms and sunflower fields.

The investigation team said that even if the four defendants may not have actually pushed the button to launch the missile, they had a role in the preparations.

One of those charged was Russian citizen Igor Girkin, a retired colonel in Russia's main intelligence agency, the FSB. He led Russian and separatist forces in Ukraine's Donetsk region in 2014.

Girkin dismissed the accusations in a telephone interview Wednesday, saying the “insurgents did not shoot down the Boeing.” Girkin lives in Moscow.

Girkin led a group of Russian men who crossed into Ukraine and occupied the town of Slovyansk, which became the site of major fighting. He wrote on his social media account around the time of the jetliner attack that the rebels had shot down a Ukrainian military plane in the area where the Malaysian aircraft went down. He later deleted that post.

The Joint Investigation Team, made up of detectives from the Netherlands, Malaysia, Australia, Belgium and Ukraine, said the trial will begin with or without the defendants in a top-security courtroom near Amsterdam's Schiphol Airport under Dutch law, which allows trials in absentia. The men could get life in prison if convicted.

The Netherlands has taken the lead in efforts to bring the perpetrators to justice because nearly 200 of those killed were Dutch citizens.

Investigators have been gathering and analyzing evidence largely without help from Moscow, which dismissed the team as biased because it has no Russian members.

Last year, the team said it was convinced that the Buk missile system used to shoot down the plane came from the Russian army's 53rd Anti-Aircraft Missile brigade, based in the Russian city of Kursk.

Prosecutors appealed for witnesses to come forward to help identify the crew that manned the missile launcher and to take them further up the chain of command to identify those who authorized its deployment.

The team did not reveal much evidence Wednesday, saying the courtroom is the place to lay out the case, but played a wiretap of an alleged conversation between Alexander Borodai, who was rebel leader in the Donetsk in 2014, and senior Kremlin official Vladislav Surkov in which they appear to discuss military aid for the separatists.

Asked to characterize Moscow's co-operation with the probe, Westerbeke said it “wasn't too good,” saying investigators had asked plenty of questions, “and a lot of those questions weren't answered.”

The families of those killed were informed of the trial date at a closed-door meeting.

Silene Fredriksz-Hoogzand, of the Dutch city of Rotterdam, whose son Bryce was among the dead, expressed relief.

She said she holds Putin responsible for the attack, saying: “He made this possible. He created the situation.” As for Russia's lack of co-operation, she said, “I think it's disgusting. They deny everything, they don't co-operate. Nothing.”

Officials from the Joint Investigation Team probing the downing of Malaysia Airlines Flight 17 in 2014 appear at a press conference in Nieuwegein, Netherlands, on Wednesday, June 19, 2019. The international investigation team charged three Russians and a Ukrainian separatist with the murder of 298 people on board the plane that was shot down over Ukraine. The case is set to start in March 2020. (AP Photo/Mike Corder)