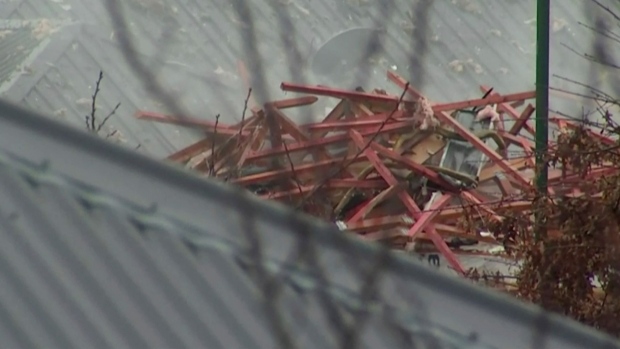 This imaged made from a video shows debris from a destroyed house on neighboring roof in Christchurch, New Zealand Friday, July 19, 2019. Several people were injured and dozens of homes evacuated in the New Zealand city of Christchurch on Friday after a huge gas explosion destroyed one home and damaged others. (TVNZ via AP)

WELLINGTON, New Zealand - Six people were injured and dozens of homes evacuated in the New Zealand city of Christchurch on Friday after a huge gas explosion destroyed one home and damaged others.

The explosion was felt for miles (kilometres) around, with some fearing it might have been an earthquake or a bomb. Footage of the aftermath shows the home was reduced to a pile of wood and rubble with flames coming out.

Authorities confirmed it was a gas explosion although said they're still investigating the cause.

Neighbour Brad Culver, a U.S. citizen who has been living in New Zealand for eight years, told Television New Zealand he thought at first a plane had crashed and ran outside.

“The house was in a complete pile of timber and rubbish, you couldn't even conceive that it was a house,” he said. “There was nothing left standing.”

“They all appeared to be OK, they were in shock but had superficial cuts, bruises, that sort of thing. It didn't look like any life-threatening injuries,” he said. “Miracle, really a miracle.”

Another neighbour, Ann Gray, told the network she was standing at her kitchen bench just after 10 a.m. when she felt what she thought was a massive earthquake.

“I looked up and I could see all the stuff going up in the air so I came outside, it was all up in the air like it was huge and it was so high, bits of wood,” she said, adding that “it took a while to come down, I thought it was going to come down on top of my house.”

Fire and Emergency New Zealand said in a statement that as well as the destroyed home, five neighbouring properties were affected by fire and another 17 were impacted by debris. It said it had extinguished the rubble fire and was investigating the scene.

Health authorities said six people had been admitted to Christchurch Hospital as a result of the explosion. The hospital couldn't immediately provide condition updates for the patients.