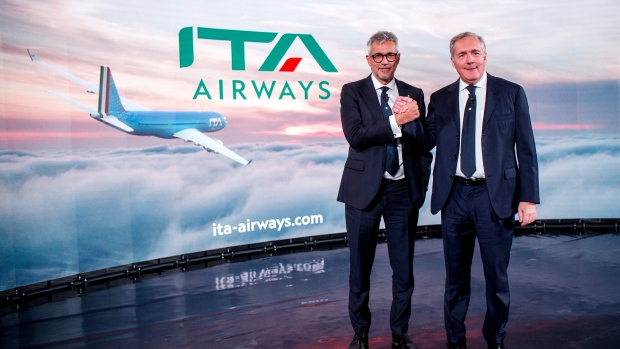 ROME (AP) - Italy's new national airline, ITA Airways, flew its inaugural flights Friday and unveiled its brand and logo, recycling the red, white and green of its Alitalia origins as it tries to chart a new future while competing with low-cost airlines.

Protests and strikes accompanied the runup to Alitalia's formal demise because the much smaller ITA Airways is only hiring around a quarter of Alitalia's more than 10,000 employees. Negotiations with unions are ongoing.

ITA paid 90 million euros (over $104 million) for the rights to the Alitalia brand and website, but the new airline is called ITA Airways and it has its own website and a new frequent flier program, called “Volare” (“Fly”).

“Discontinuity doesn't mean denying the past, but evolving to keep up with the times,” ITA President Alfredo Altavilla said in a statement.

During a conference launching the airline, Altavilla insisted that the greatly reduced size of ITA - its slimmer fleet, workforce and destinations - make it a viable carrier that can compete with low-cost airlines while offering better service, connections and value.

“ITA Airways is being born right-sized, in the optimal dimensions both in terms of the size of its fleet and its destinations,” he said. “We don't carry with us the negative inheritance of being too big that conflict with the economic reality.”

He bristled when asked about reported predictions by low-cost carriers, saying of ITA Airways' failure.

“They might be very, absolutely right that this is gonna be difficult for us, but I am really curious to see one day their PnL (Profits and Loss) and their balance sheet without all the subsidies that they are getting from the local institutions and the small airports here in Italy,” Altavilla said.

“I want a level playing field,” he added.

The first ITA flight was the 6:20 a.m. from Milan's Linate airport to the Italian city of Bari, on the Adriatic Sea. In all, ITA is flying to 44 destinations and aims to increase that number to 74 in four years.

Among its routes, the company plans to operate flights to New York from Milan and Rome, and to Tokyo, Boston and Miami from Rome. European destinations from Rome and Milan's Linate airport will also include Paris, London, Amsterdam, Brussels, Geneva and Frankfurt, Germany. Routes to South America and Los Angeles are planned.

ITA planes will be royal blue with Alitalia's trademark “tricolore” on the tail, reflecting the red, white and green of the Italian flag. The Italian national sports team colors are blue, and company officials said Friday that the color scheme chosen for the new aircraft aims to make ITA “azzurri,” - the team nickname - too.

For now, the new blue Airbus aircraft exists only in advertisements, with Alitalia's old white fleet actually in the skies.

Officials were coy about possible partnerships with other airlines. Previously, Alitalia was a member of the SkyTeam alliance, which included Delta, Air France and KLM, among other airlines.

ITA has 52 planes that it says will grow to 105 in the same period and is pointing to next-generation aircraft that use sustainable, alternative fuel sources.