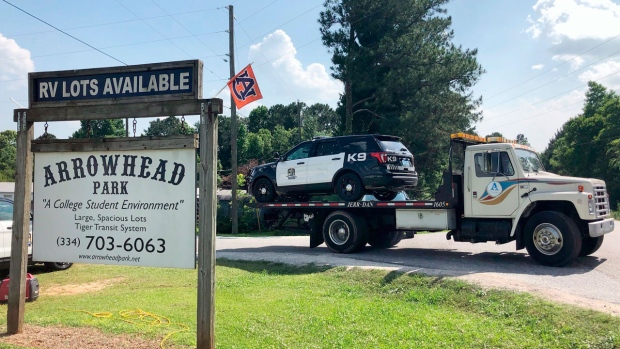 A tow truck removes a police car from a mobile home park, Monday, May 20, 2019, in Auburn, Ala., where three police officers were shot late Sunday. Authorities say a man opened fire on police responding to a domestic call late Sunday, killing one officer and wounding two others. (AP Photo/Blake Paterson)

AUBURN, Ala. -- A man who opened fire on police responding to a domestic disturbance report, killing one officer and wounding two others, was arrested Monday and charged with capital murder, authorities said.

Grady Wayne Wilkes, 29, was being held without bond in the shooting death of Officer William Buechner, who had been with the Auburn Police Division for more than 13 years.

Wilkes also was charged with attempted murder in the wounding of officers Webb Sistrunk and Evan Elliott, said Police Chief Paul Register. Both are expected to recover.

The chief described Wilkes as a former member of the military who was working in the area and hadn't had previous contact with police. The "Blue Alert" sent out after the officers were shot described him as wearing camouflage body armour and a helmet.

But with helicopters hovering overhead, he didn't get far. An intense, overnight manhunt led to Wilkes' arrest about nine hours after the shootings, less than a mile from the Arrow Head Trailer Park, where the officers were hit. Information from a citizen helped police and U.S. marshals take him down.

The chief called the arrest "relatively uneventful" and said no one was injured bringing Wilkes into custody. A booking photo released by police showed Wilkes with red marks and apparent bruises on his face. Auburn Police spokesman Lorenza Dorsey said the injuries occurred before police found him.

The person who called police wasn't hurt, the chief said, but Wilkes also was charged with domestic violence.

Court records weren't available immediately to show whether Wilkes had a lawyer. Register wouldn't comment on details of the investigation.

The Lee County coroner Bill Harris said the officer who was killed died in an emergency room.

"This is probably the worst day of my time here," Register said. "Words cannot express the loss for this family, our family and this community."

"This is so tragic and so useless. I'm just heartbroken," she said Monday during an appearance in Montgomery.

A woman from Coffee County, south of Auburn, had asked a judge in November for a court order protecting her from abuse by Wilkes, records show.

She wrote in a court document that Wilkes, who had an Enterprise address at the time, sexually assaulted her while she was incapacitated and she feared he would harm her after learning she was pressing charges. She is married to another man.

The judge refused a protection order following a hearing in January, ruling that the woman didn't have a "qualifying relationship" with Wilkes, whom she said she did not know before the alleged assault.

There is no record of sexual assault charges against Wilkes, who records show doesn't have a criminal record in Alabama.

City officials said Buechner was believed to be the first Auburn police officer killed in the line of duty.

"It might be Auburn's most difficult day," said Mayor Ron Anders Jr.