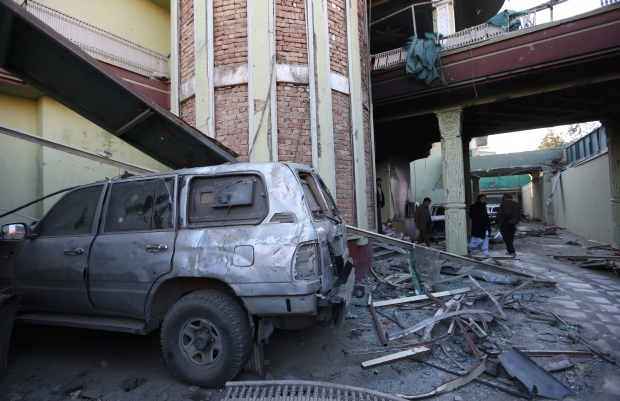 KABUL -- At least seven people have been killed in a Taliban attack near the Spanish embassy in the capital, Kabul, the government said.

Sediq Sediqqi, spokesman for the Afghan Interior Ministry, said on Saturday that four Afghan police officers and two others, including a foreigner, were killed in the attack. The Spanish Interior Ministry later announced that a Spanish policeman had been killed and a second Spanish officer had later died from injuries sustained in the battle, bringing the total death toll up to seven.

Seven civilians and two policemen were wounded, Sediqqi said. Twelve foreign citizens were rescued by Afghan forces during the operation, he added.

Zabihullah Mujahid, spokesman for the Taliban, claimed responsibility for the attack in an email sent to media outlets.

The attack took place in the Kabul district of Shir Pur, which is home to many foreign embassies, guesthouses and the homes of high-ranking government officials. It took local security forces more than 10 hours to bring the area back under control.

The Kabul attack came two days after another massive Taliban attack on the main airport in the southern city of Kandahar, which lasted more than 24 hours and killed more than 50 people. The casualties from the Kandahar attack, which ended Wednesday night, included 38 civilians, 10 Afghan soldiers and two police officers, according to the Ministry of Defence.

Separately a district chief was shot and killed by insurgents in the northern province of northern Baghlan, said Jawed Basharat, spokesman for the provincial police chief.

Abdul Jabar, district chief for the Borka district, came under attack on the main road near Puli Khumri, the provincial capital. Basharat said that Jabar's driver and two of his bodyguards were abducted by the insurgents and police forces were searching for the missing men.

No group has yet claimed responsibility for the killing of Jabar, but Taliban militants have increased their attacks recently on Afghan government officials and security forces.