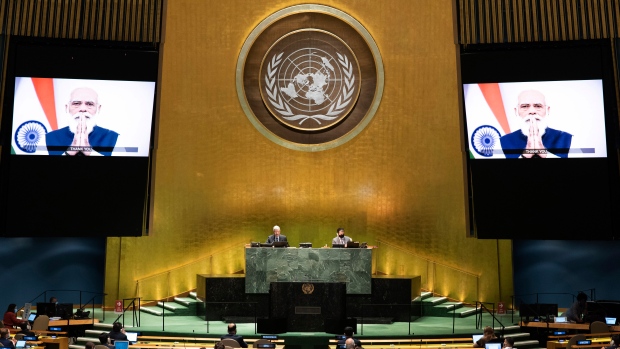 In this photo provided by the United Nations, Narendra Modi, Prime Minister of India, speaks in a pre-recorded message which was played during the 75th session of the United Nations General Assembly, Saturday, Sept. 26, 2020, at the UN. headquarters. (Evan Schneider/UN Photo via AP)

But he made no mention in his U.N. General Assembly speech of the particularly heavy toll the pandemic has taken on his own country, where the enormous population has suffered among the highest numbers of cases and deaths in the world.

Modi also said nothing about growing tensions with neighbouring Pakistan and China.

Instead, Modi cast India as a country that treats “the whole world as one family,” and emphasized the country's push for a bigger role at the U.N..