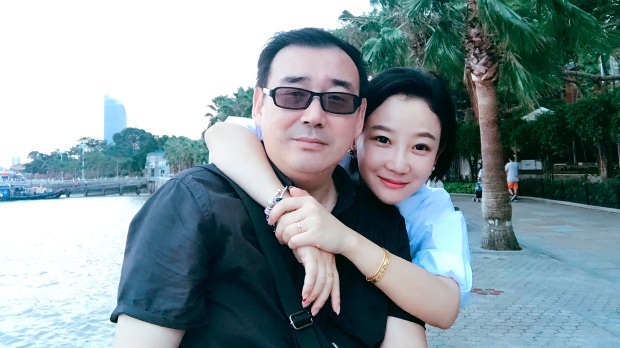 This undated photo released by Chongyi Feng shows Yang Hengjun and his wife Yuan Xiaoliang. The Australian government said on Tuesday, Aug. 27, 2019, it was "very concerned and disappointed" that the Chinese Australian writer had been formally arrested in China on suspicion of espionage. Yang has been in Chinese custody since he arrived in southern China's Guangzhou from New York on Jan. 19, 2019 with his wife Yuan and his 14-year-old stepdaughter. China revealed in July that the 54-year-old academic and former Chinese government official had been detained. (Chongyi Feng via AP)

CANBERRA, Australia -- Australia's foreign minister on Monday described as "unacceptable" the daily interrogation of a shackled Chinese Australian writer detained in Beijing since January on suspicion of espionage.

Yang Hengjun was taken into custody upon arriving in southern China's Guangzhou from New York in January with his wife, Yuan Xiaoliang, and his 14-year-old stepdaughter.

Foreign Minister Marise Payne said she was "very concerned" by reports from Australian officials following their latest monthly consular visit to Yang, who remains in criminal detention. Her office did not immediately say when the visit took place.

"His circumstances of detention include increased isolation from the outside world, with restrictions on his communications with family and friends and the resumption of daily interrogation, including while shackled," Payne said in a statement. "This is unacceptable."

"As far as I know, the person you mentioned is now in good condition. There's no so-called integration or torture," Hua said.

Australia has made repeated requests to Chinese authorities for an explanation of the charges against the 54-year-old spy novelist, Payne said.

"We have also made repeated requests for him to be afforded basic standards of justice, procedural fairness and humane treatment, in line with international norms, including access to his lawyers and to his family, both of which continue to be denied to him," Payne said. "This has not led to any substantive changes in his treatment."

"We will continue to express our expectations in clear terms to the Chinese authorities -- both in Beijing and in Canberra -- including that Dr. Yang be released and that, while his detention continues, he be treated fairly and humanely," she added.

The Chinese Embassy in Australia did not immediately respond to a request for comment.

Some analysts suspect Yang has been detained because of Chinese anger over Australian legislation passed by Parliament last year that outlaws covert foreign interference in Australian politics and institutions.

"We would like to see the issues about access to lawyers, about getting a clear enunciation of what the matter is that have been brought against the Australian citizen at the centre of this case, and ... that his access to family and treatment that would meet, you know, world standards is being provided to him," Morrison told reporters.

"The most recent consular access was a matter of great concern to me and the foreign minister and we will continue to make those representations on behalf of an Australian citizen," he added.

China says it doesn't threaten or torture criminal suspects, but both practices are routinely alleged by those who produce confessions that they later retract.

China has been angry over the allegations that it is interfering in Australian politics and manipulating members of the Chinese expatriate population there, including university students.

On Friday, Hua called the accusations, strongly backed by witness testimony, "nothing but ridiculous farces, like some shoddy soap operas."

Alleged Chinese spy Wang Liqiang told overseas media last month that he had been embedded in a Hong Kong-listed company to extend Beijing's influence in the territory, as well as in Australia and Taiwan.

China has attempted to discredit Wang, saying he is a convicted fraudster wanted by Shanghai police.