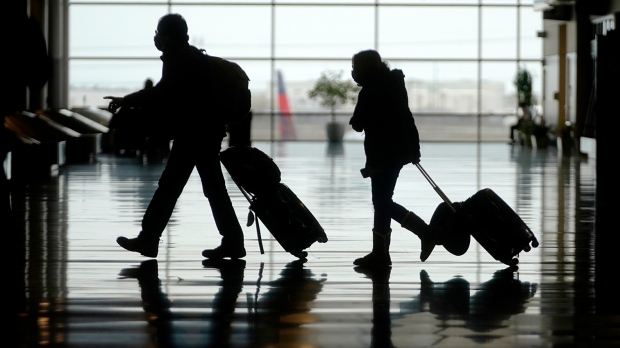 Experts are worried some Americans are letting up too early -- at a critical time when looming dangers are threatening to wipe out the progress the U.S. has made in its battle against COVID-19. (Rick Bowmer/AP)

CANBERRA, Australia - Australia's drastic COVID-19 strategies of preventing its citizens leaving the country and returning from India were challenged in court Thursday.

The government is resisting growing pressure to lift the Indian travel ban imposed last week until May 15 to reduce infections in Australian quarantine facilities.

A challenge to the ban by Gary Newman, one of 9,000 Australians prevented from returning home from India, will be heard by a Federal Court judge on Monday, Chief Justice James Allsop said.

The ban was ordered by Health Minister Greg Hunt under the Biosecurity Act, which carries penalties for breaches of up to five years in prison and fines of up to 66,000 Australian dollars ($51,000).

A libertarian group LibertyWorks took its case to the full bench of the Federal Court on Thursday against a separate order under the Biosecurity Act that has prevented most Australians from leaving the country without compelling reasons since March last year.

The government hopes to maintain Australia's relatively low levels of community transmission of the virus by preventing its citizens from becoming infected overseas and bringing variants home. Travel to and from New Zealand has recently been exempted.

LibertyWorks argues that Hunt does not have the power to legally enforce the ban, which has prevented thousands of Australians from attending weddings and funerals, caring for dying relatives and meeting newborn babies.

With almost one third of Australians born overseas and most barred from leaving the country for more than a year, a win by LibertyWorks is likely to lead to a surge in citizens wishing to travel internationally. The three judges said at the end of Thursday's hearing that they will announce their verdicts at a later date.

LibertyWorks President Andrew Cooper said after the hearing that he expected Australians could be free to fly again by the end of May.

“By the government's own records, they've rejected 74,000 applications to travel,” Cooper said. “So we would anticipate there'd be hundreds of thousands of Australians that do want to travel.”

The challenge to the Indian travel ban will be heard by Justice Michael Thawley five days before flights could potentially resume.

“The early evidence indicates that that temporary pause to May 15 is on track and that we are very hopeful and confident that on the other side of May 15 we'll be able to start restoring those repatriation flights,” Morrison said.

Newman's lawyer Christopher Ward told a preliminary hearing on Thursday that the legal team wanted a verdict before May 15. The lawyers argue that it is important that the minister's power was reviewed by the court even if the travel ban was not extended.

India's Deputy High Commissioner Palaniswamy Subramanyan Karthigeyan said the travel ban had not damaged bilateral relations, but India hoped it would be lifted “as soon as possible.”

“I know it is difficult and not easy for any stakeholders, but I would refrain from commenting on the decision of the government,” Karthigeyan told Australian Broadcasting Corp.

Immigration Minister Alex Hawke said Indian-Australian community leaders had been understanding of the government's reasons for the travel ban during a nationwide online meeting on Wednesday.

None of the community advocates believed that the government “'made a decision based on race,” Hawke said.

But one of those leaders, Amar Singh, founder of the Sikh charity Turban 4 Australia, said the government would face a voter backlash over the Indian travel ban at the next election due within a year.

“In my opinion, it's a ban without a plan. It's a knee-jerk reaction to this situation,” Singh said.

Opposition leader Anthony Albanese said the government's response to India's pandemic crisis “has been regrettable, has been short sighted and hasn't been thought through.”

“If anyone thinks that our relations with India have been improved in the last week, then they're kidding themselves,” Albanese said.