Bagels and challah for Jews keeping kosher at World Cup 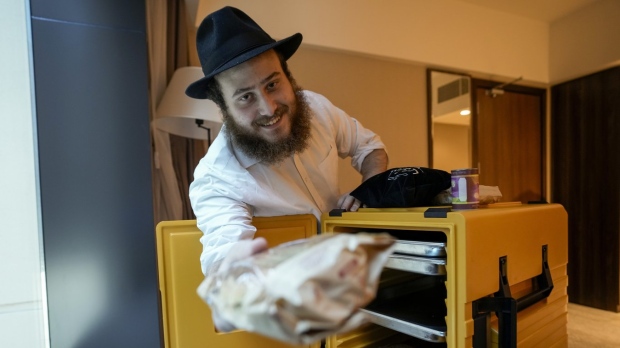 Eli Chitrik from Turkey shows bagel sandwiches at his hotel room in Doha, Qatar, Monday, Nov. 28, 2022. Stored into bright orange cases in Rabbi Eli Chitrik’s hotel room are bagels stuffed with vegetables. The labels declare the sandwiches kosher, or in compliance with Judaism’s set of dietary regulations. Freshly baked, they are made in Qatar at a designated kitchen, set up to feed Jewish World Cup visitors who want to keep kosher during the tournament. (AP Photo/Moises Castillo)

DOHA, Qatar (AP) — Rabbi Eli Chitrik’s phone buzzes. A woman is about to show up at his Doha hotel to pick up her lunch: two bagel sandwiches.

It's one of many calls and messages Chitrik is receiving these days for bagel sandwiches, freshly made in a designated kosher kitchen set up for Jewish World Cup fans who want to comply with Judaism’s set of dietary regulations during the tournament in Qatar.

Chitrik said the kosher kitchen has been making 100 sandwiches a day to feed fans from around the world, including Argentina, Australia, Brazil, the United States, Uruguay and Israel. Recently, production has increased to more than 100 to meet demand.

On Fridays, the kitchen makes challah, special bread, usually braided, that is traditional food on the Sabbath.

Rabbi Marc Schneier, president of the New York-based Foundation for Ethnic Understanding, said he had been involved in discussions with Qatari officials for the past five years to help accommodate the attendance of Jewish fans at the tournament. Besides making kosher food available, he said, discussions included the attendance of Israelis at the World Cup and direct flights from Tel Aviv to Doha, despite Israel and Qatar having no diplomatic relations.

“It’s a very important step from an interreligious point of view ... from a Qatar-Israel point of view,” he said. “There are so many levels here.”

Qatari officials, with their history of public support for Palestinians, have insisted the temporary opening to Israelis was purely to comply with FIFA hosting requirements — not a step to normalizing ties as Bahrain and the United Arab Emirates did in 2020. Qatar, which often serves as a mediator between Israel and the Hamas militant group in Gaza, has warned that a spike in violence in the occupied West Bank or Gaza Strip would derail the arrangement. Despite a surge in deadly fighting in the West Bank in recent days, however, it has taken no action.

Having ties with Israel is a contentious topic, unpopular among many Arabs, due to factors such as Israel’s 55-year West Bank occupation and a lack of a resolution to the Palestinian issue. Israeli social media has been filled with videos showing Israeli TV reporters receiving hostile receptions from Arab soccer fans in Qatar.

The Qatari World Cup organizing committee did not respond to emailed questions about the kosher kitchen.

Early each morning, Chitrik heads to the kitchen. There, he supervises the sandwich-making process — from opening the ovens himself to inspecting ingredients for compliance with kosher standards. Sundried tomatoes in jars, for instance, were excluded for containing non-kosher ingredients; tomatoes are dried in the kitchen’s oven instead.

"I know every little thing that happens in that kitchen, so that way I can tell you 100%, no question, this is a kosher sandwich,” he says.

Visitors typically make arrangements to pick up their kosher food from Chitrik. He keeps the bagel sandwiches stored into special cases in his hotel room, with labels declaring the food kosher.

Tirtsa Giller, who is visiting from Israel for World Cup-related work, came to the hotel on Sunday to pick up her lunch.

Flying into Doha, she had stuffed her luggage with dishes, a frying pan, cutlery, tuna cans and snacks to keep kosher. Working long hours and not wanting to rely on just snacks, she said she was excited when friends in Dubai told her about the new kosher offerings in Doha.

“Everyone was searching for this information, if there is kosher food,” she said. “We were afraid that it’s banned because there were rumors. I’m happy to find out it’s not.”

When he's not in the kitchen or handing out sandwiches at his hotel, Chitrik, who was born in Israel but raised in Turkey, said he had been going out on the streets of Doha in his religious garb, including a black hat and tzitzit, a ritual fringed garment.

His father, Rabbi Mendy Chitrik, who chairs the Alliance of Rabbis in Islamic States, came to Qatar ahead of the tournament to inspect the kosher kitchen, which he and other rabbis involved say was made possible through working with Qatari officials.

“Religious rights and freedoms of Jews, as well as any other religious group, are very, very important to be safeguarded,” said Mendy Chitrik, who is also the rabbi of the Ashkenazi community of Turkey.

“Football and food,” he said, “bring people together.”