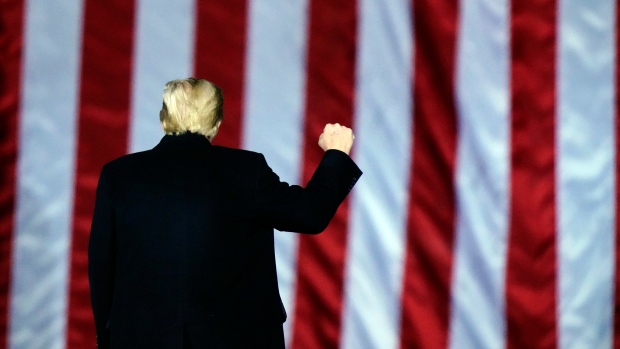 WASHINGTON - With only days left in his presidency, Donald Trump - silenced by Twitter and shunned by a growing number of Republican officials - faces a renewed drive by Democrats to remove him from office after he incited his supporters to storm the U.S. Capitol.

Democratic members of the House of Representatives will introduce formal articles of impeachment on Monday, Representative Ted Lieu said on Twitter. The California Democrat, who helped draft the charges, said the articles had drawn 180 co-sponsors as of Saturday afternoon. A spokeswoman for Lieu said no Republicans have yet signed on.

House Speaker Nancy Pelosi, the top congressional Democrat, has threatened to impeach Trump for a historic second time unless he resigned "immediately," a move the pugnacious president is unlikely to consider.

Pelosi has also asked members to draft legislation aimed at invoking the U.S. Constitution's 25th Amendment, which allows the removal of a president unable to fulfill the duties of the office.

Trump "has done something so serious -- that there should be prosecution against him," Pelosi told CBS' "60 Minutes" according to an early excerpt of the interview.

The intensifying effort to oust Trump from the White House has drawn scattered support from Republicans, whose party has been splintered by the president's actions. Democrats have pressed Vice President Mike Pence to consider the 25th Amendment, but a Pence adviser has said he opposes the idea.

The odds that Trump will actually be removed before Jan. 20, when President-elect Joe Biden is sworn in, remain long. Any impeachment in the House would trigger a trial in the Republican-controlled Senate, which is scheduled to be in recess until Jan. 19 and has already acquitted Trump once before.

Majority Leader Mitch McConnell sent a memo to his fellow Republican senators suggesting a trial would not begin until Trump was out of office, a source familiar with the document said. A conviction in the Senate requires a two-thirds vote.

Democrats will take control of the Senate later this month, after Georgia certifies two runoff elections won by Democratic challengers.

Twitter permanently cut off Trump's personal account and access to his nearly 90 million followers late on Friday, citing the risk of further incitement of violence, three days after Trump exhorted thousands of supporters to march on the Capitol as Congress met to certify Biden's Nov. 3 election victory.

The resulting assault, viewed with shock around the world, left a police officer and four others dead in its wake, as rioters breached the Capitol and forced lawmakers into hiding for their own safety.

In his first public comments, Pope Francis said he was "astonished" and that anyone engaged in attacks on democracy must be condemned.

A Florida man who was photographed smiling and waving as he carried Pelosi's lectern from the House chambers amid the chaos was arrested by federal law enforcement late Friday.

Authorities also arrested a man seen in widely shared photographs wearing a horned fur hat and carrying a spear inside the Capitol. Dozens of others face federal and state charges.

Twitter's decision stifled one of Trump's most potent tools. His frequent posts helped propel his 2016 presidential campaign, since which he has used the site to fire up his base and attack his political opponents from both parties.

Trump later used the official @POTUS government account to lash out at Twitter, saying the 75 million "great patriots" who voted for him would not be silenced, and that he was considering building his own social media platform.

A Reuters/Ipsos poll conducted Thursday and Friday found 57 per cent of Americans want Trump to be removed immediately from office following the violence.

A small but growing number of Republicans have joined calls for Trump to step down, and several high-ranking administration officials resigned in protest.

Senator Lisa Murkowski of Alaska said Friday that Trump should resign immediately and suggested she would consider leaving the party altogether if Republicans cannot separate themselves from him.

"I want him out. He has caused enough damage," she told the Anchorage Daily News.

Senator Ben Sasse of Nebraska, a frequent Trump critic, told CBS News he would "definitely consider" impeachment because the president "disregarded his oath of office."

Trump allies, including Senator Lindsey Graham and House Republican leader Kevin McCarthy, however, urged Democrats to shelve any impeachment effort in the name of unity.

Democratic lawmakers have also called for some of their Republican colleagues to resign or be expelled over their roles supporting Trump's unfounded claims of a rigged election.

Sherrod Brown, Democratic senator from Ohio, wrote on Twitter on Saturday that Senators Ted Cruz and Josh Hawley, who called for Electoral College votes of states that voted for Biden to be rejected, had "betrayed their oaths of office and abetted a violent insurrection on our democracy."

"If they do not resign, the Senate must expel them," said Brown, the first senator to call for the pair to be expelled.

Representative Don Beyer, a Democrat from Virginia, also called on McCarthy to resign for backing efforts to block Biden's election.

A copy of draft articles of impeachment circulating among members of Congress charged Trump with "inciting violence against the government of the United States" in a bid to overturn his loss to Biden.

The House impeached Trump in December 2019 for pressuring the Ukrainian president to investigate Biden, but the Senate acquitted him in February 2020. Only two other presidents have been impeached, and none has been impeached twice.

Trump spent months falsely claiming the election was stolen from him due to widespread fraud. Dozens of courts across the country have thrown out lawsuits challenging the results, and election officials from both parties have said there is no evidence to support his allegations.