Belarus leader in Moscow for talks on closer ties 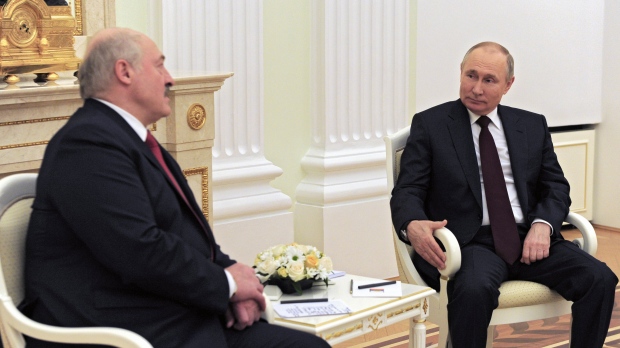 MOSCOW - Russian President Vladimir Putin hosted his Belarusian counterpart on Thursday for talks on closer integration between the two ex-Soviet neighbours, discussions that were criticized by the Belarusian opposition.

Belarusian President Alexander Lukashenko has grown increasingly dependent on Russia's financial and political support after months of massive protests against his disputed re-election in August. His trip to Moscow raised speculation that he could finally accept the Kremlin's longtime push for a stronger union.

The main Belarusian opposition challenger in the vote, Sviatlana Tsikhanouskaya, warned that Lukashenko has lost his legitimacy and the opposition would not accept any deal with Russia that would weaken Belarus' independence. The opposition says official results that gave Lukashenko a sixth term in office after the August presidential election were fraudulent.

“We, the Belarusians, will not surrender the country's sovereignty and independence, and any decisions threatening it will not have legal force and will be revised,” Tsikhanouskaya told The Associated Press from Vilnius, Lithuania.

Speaking at the start of the meeting, Lukashenko said Russia and Belarus must “draw the lines that no one should cross and respond to those who fail to understand the need to behave more calmly.”

The Belarusian leader fueled expectations of a major deal with Russia when he declared over the weekend that he was preparing to make one of the most important decisions of his more than quarter-century rule.

“We have made some serious progress on programs of our union,” Lukashenko said at the start of his talks with Putin. “There are acute issues related that we need to focus on, including defence and security.”

Russia and Belarus have a union agreement that envisages close economic, political and military ties, but stops short of a full merger. Lukashenko has repeatedly resisted what he described as Moscow's attempts to subdue Belarus.

“Our teams are continuing work to develop the legislation for the union state,” Putin said.

The authoritarian Belarusian leader, who has been in power since 1994, has vowed not to abandon Belarus' post-Soviet independence and resisted Moscow's push for opening a military base in Belarus.

But Lukashenko's positions have weakened amid massive protests against his rule. Belarus authorities cracked down harshly on the protests, arresting more than 34,000 people and beating many. Most prominent opposition figures have fled Belarus or have since been jailed.

The U.S. and the European Union have responded by slapping sanctions on Belarus.

On Monday, Washington ramped up sanctions against Belarus, with the U.S. Treasury Department announcing it was revoking a license that had allowed transactions with nine top state-owned companies in Belarus since 2015. They include the oil company Belneftekhim, which accounts for 30% of the country's industrial output.

Amid the Western pressure, Lukashenko has edged closer to Russia. He alleged that the U.S. was behind the botched coup attempt - a claim the White House has rejected.

“The man who cast himself as a `guarantor of sovereignty for decades has become a direct threat to sovereignty,” Tsikhanouskaya said of Lukashenko.

Tsilkhanouskaya, who was pressured to move to Lithuania after the presidential vote, emphasized that the Belarusian leader “lacks a legitimate right to make decisions that affect national interests and influence the country's future.”

“We don't need any additional `protection' by Russia,” she told the AP.

In Wednesday's state of the nation address, Putin harshly criticized the West for failing to condemn the alleged coup attempt in Belarus.

Tsikhanouskaya has dismissed the coup claim as an apparent “provocation of Russian and Belarusian security agencies.”