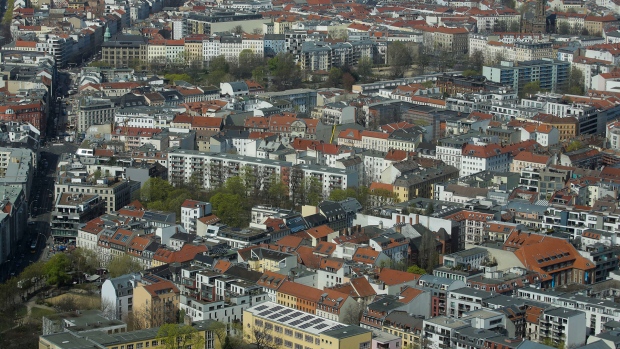 In this Thursday, April 4, 2019, file photo, Apartment buildings in the district Mitte photographed from the television tower in Berlin, Germany.The city of Berlin is freezing the rent of 1.5 million apartments for the next five years starting this Sunday in a controversial move to control the exploding costs that have forced many to move outside the city. Berlin is the first city in Germany to influence the rental prices so directly and the law has been both celebrated as a step toward more fairness by its supporters and ripped apart as a socialist method by critics. (AP Photo/Markus Schreiber, file)

Berlin is freezing the rents of 1.5 million apartments for the next five years starting this Sunday in a controversial move to control the exploding costs that have forced many to move outside Germany's capital city.

Berlin is the first German city to influence the rental prices so directly and the law has been both celebrated as a step toward more fairness by its supporters and ripped apart as a socialist method by critics.

“It is correct that Berlin tries to stop the spiraling rent costs,” Ulrich Ropertz, the head of the German Tenants Association, told German news agency dpa. “The federal legislature has missed the opportunity to pass effective measures in recent years.”

Only a minority of Berliners own their homes or apartments - as in the rest of the country, the majority of people traditionally rent their homes.

The German capital had been a low-rent mecca after the fall of the Berlin Wall in 1989 opened the gates to the economically depressed former communist east of the city.

That gave rise to an influx of artists and others seeking a more bohemian way of life. However, in recent years, rents have skyrocketed in the city of more than 3.7 million inhabitants, pushing middle class families from Berlin's central residential neighbourhoods like Mitte or Prenzlauer Berg to the outskirts. Even traditionally working class and immigrant neighbourhoods like Neukoelln or Kreuzberg have become so gentrified that long-time tenants can no longer afford therisingrents.

In addition there is an overall housing shortage in Berlin, which makes it even more difficult for newcomers or those who get pushed out of their homes due to the rent spike to find new, affordable living accommodations.

The rent freeze is supposed to keep rents for apartments that were built before 2014 at the current level for the next five years. Critics have pointed out that the rent freeze will keep landlords from investing any money into much-needed renovations of homes, because they cannot raise the rent afterward.

Tenants, who think their rent isover-priced, have been encouraged by pro-tenant organizations to ask their landlords for a reduction in rent. However, the controversial law has been taken to court by its opponents and some experts have warned tenants to keep all the extra money that they may now be saving on the side, in case the rent freeze is eventually overturned in court.

The rent freeze, which was implemented by Berlin's left-leaning coalition government, has been strongly criticized by Chancellor Angela Merkel's more conservative Christian Democrats, who are in the opposition in Berlin's city-state government.

In a statement Sunday, the Berlin faction of the Christian Democrats wrote that, “the law is not a solution for the continuing housing shortage ...The freeze does not help anybody if, in the end, saved rent has to possibly be paid back.”