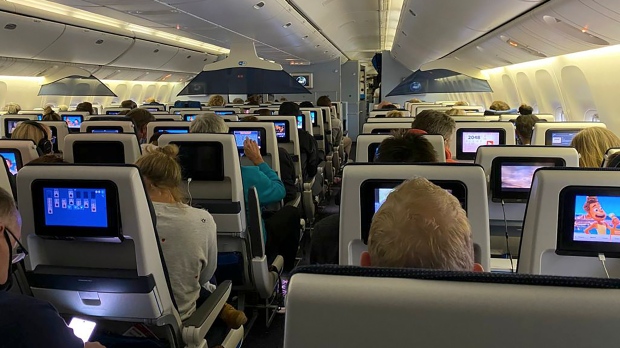 Passengers sit in their seats aboard KLM Flight 598 on the tarmac at Schipol airport in Amsterdam after it landed from Cape Town, South Africa on Friday Nov. 26, 2021. The flight was held on the edge of the runway at Schiphol airport for four hours pending special testing because of the new variant. (UGC via AP)

(CNN) -- President Joe Biden announced Friday the US will restrict travel from South Africa and seven other countries starting Monday as a new coronavirus variant has emerged.

Acting on advice from the nation's top infectious diseases expert, Dr. Anthony Fauci, and the US Centers for Disease Control and Prevention, the Biden administration will restrict travel from South Africa, Botswana, Zimbabwe, Namibia, Lesotho, Eswatini, Mozambique and Malawi.

Biden on Friday night signed the official proclamation restricting the travel of those "physically present" in the countries during the "14-day period preceding their entry, or attempted entry into the United States."

It says it will remain in effect until terminated by the President and will not apply to any flights scheduled to arrive in the US that depart prior to 12:01 a.m. EST on Monday.

The decision to restrict travel comes as the federal government is still attempting to learn more about the new variant, named Omicron. They need to see more sequencing, but after discussing what they've seen so far, officials decided to halt travel from these other countries out of concern about what they don't yet know.

Biden was briefed Friday on the new coronavirus variant circulating in southern Africa, he said in the announcement.

He told reporters later Friday of the decision: "I've decided we're going to be cautious."

"We don't know a lot about the variant except that it is a big concern and seems to spread rapidly, and I spent about a half hour this morning with my Covid team led by Dr. Fauci, so that was the decision we made," the President said.

Officials said the policy was implemented out of an abundance of caution given the World Health Organization has now identified this as a variant of concern.

"Our scientists and public health officials are working quickly to learn more about this variant," one official said.

A senior Biden administration official said earlier Friday that several steps had to be taken before the restrictions begin on Monday, including the formal US proclamation, Transportation Security Administration directives and coordination with airlines.

"This is a quick timeline but there are things that need to be done beforehand," the official said.

An airline source told CNN that airline executives and the White House were in touch Friday, prior to the announcement of new travel restrictions.

Another source familiar with the situation said there was a call Friday afternoon with the federal government and the airline industry. The federal government is working on drafting an official directive that will include guidelines for airlines that go into effect just after midnight Monday morning.

The trade group for major US airlines said it has "many unanswered questions" about the forthcoming restrictions. Airlines for America spokesman Carter Yang told CNN the group is communicating with the administration and believes that travel decisions must "be rooted in science."

"We remain in communication with the US government as specifics remain unknown at this time and there are many unanswered questions," Yang said. "Amid this rapidly evolving situation, it is critical that US government decisions regarding international travel restrictions and requirements be rooted in science."

South Africa's health minister announced Thursday the discovery of the variant, which appears to be spreading rapidly in parts of the country.

The travel restrictions will buy the US federal government more time to investigate the new variant, officials say -- but not much.

Inside the government, it is seen as inevitable that the new variant will appear in the US at some point, but the new restrictions should give federal health agencies and their global counterparts more time to learn about the variant, including the severity of the disease it causes. Officials do not believe, based on current thinking, that the variant is in the US yet.

Officials acted quickly to implement new restrictions. While the emergency of the variant had been flagged in the last several weeks, it was only in recent days that they learned how serious it was.

US officials are expected to speak to scientists in South Africa again, potentially on Sunday.

Currently, "there's no indication" that the new variant is in the United States right now -- and US scientists are working closely with colleagues in South Africa to learn more about the emerging variant, Fauci, Biden's chief medical adviser and the director of the National Institute of Allergy and Infectious Diseases, told CNN's Brianna Keilar before the travel restrictions were announced Friday.

"Right now, we're getting the material together with our South African colleagues to get a situation where you could actually directly test it. So, right now you're talking about sort of like a red flag that this might be an issue -- but we don't know," he said.

"You want to find out if in fact it does evade the vaccines that we're doing," Fauci said when asked about potential travel restrictions. "You're prepared to do everything you need to do to protect the American public, but you want to make sure there's a basis for doing that."

Several other countries -- including the United Kingdom -- have banned flights from South Africa and surrounding African countries in response to the emergence of the variant.

The travel restrictions do not apply to American citizens and lawful permanent residents. As with all international travelers, they must still test negative prior to travel.