Biden says nation weary from COVID-19, but U.S. in a better place 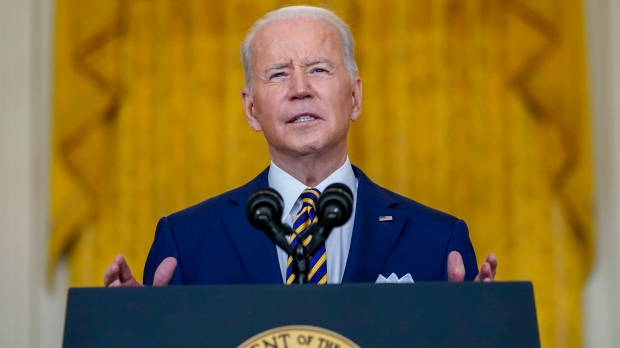 President Joe Biden speaks during a news conference in the East Room of the White House in Washington, Wednesday, Jan. 19, 2022. (AP Photo/Susan Walsh)

WASHINGTON (AP) - President Joe Biden acknowledged Wednesday that the pandemic has left Americans exhausted and demoralized but insisted at a news conference marking his first year in office that he has “outperformed” expectations in dealing with it.

Facing sagging poll numbers and a stalled legislative agenda, Biden conceded he would likely have to pare back his “build back better” recovery package and instead settle for “big chunks” of his signature economic plan. He promised to further attack inflation and the pandemic and blamed Republicans for uniting in opposition to his proposals rather than offering ideas of their own.

This is a perilous time for Biden: The nation is gripped by a disruptive new surge of virus cases, and inflation is at a level not seen in a generation. Democrats are bracing for a potential midterm rout if he can't turn things around.

Biden insisted that voters will come to embrace a more positive view of his tenure - and of his beleaguered party - in time. His appeal to voters for patience came with a pledge to spend more time outside of Washington to make the case to them directly.

Biden also addressed the brewing crisis on the Ukraine border, where Russia has massed some 100,000 troops and raised concerns that Moscow is ready to launch a further invasion.

The president said his “guess” is Russia may move further but he believes President Vladimir Putin doesn't want full-blown war. He declared Russia would pay a “dear price” if Putin launches a military incursion.

“He has to do something,” Biden said of Putin. “He is trying to find his place in the world between China and the West.”

Biden suggested a “minor incursion” might elicit a lesser response than a full-scale invasion of the country, a comment that drew immediate condemnation from some corners.

White House press secretary Jen Psaki indicated in a subsequent statement that that wasn't necessarily about tanks and troops.

“President Biden also knows from long experience that the Russians have an extensive playbook of aggression short of military action, including cyberattacks and paramilitary tactics. And he affirmed today that those acts of Russian aggression will be met with a decisive, reciprocal, and united response,” she said.

Biden held forth for 1 hour 50 minutes in the East Room of the White House, appearing to relish the opportunity to parry questions from two dozen journalists with doses of wit and a few flashes of anger. At several points, he looked at his watch, smiled and kept calling on reporters.

He fielded questions about inflation, nuclear talks with Iran, voting rights, political division, Vice President Kamala Harris' place on the 2024 ticket, trade with China and the competency of government. Those questions showed the multitude of challenges confronting the president, each of them as much a risk as an opportunity to prove himself.

The president began by reeling off early progress in fighting the virus and showcasing quick passage of an ambitious bipartisan roads-and-bridges infrastructure deal. But his economic, voting rights, police reform and immigration agenda have all been thwarted in a barely Democratic-controlled Senate, while inflation has emerged as an economic threat to the nation and a political risk for Biden.

Despite his faltering approval numbers, Biden claimed to have “probably outperformed what anybody thought would happen” in a country still coping with the coronavirus.

“After almost two years of physical, emotional and psychological impact of this pandemic, for many of us, it's been too much to bear,” Biden said.

“Some people may call what's happening now `the new normal,” he added, his voice rising. “I call it a job not yet finished. It will get better.”

On his nearly $2 trillion economic agenda that West Virginia Sen. Joe Manchin has blocked from moving forward, Biden said he'll pass the parts of the package that can net sufficient votes. This likely means not extending the expanded child tax credit or providing financial support to community colleges, Biden said.

“I think we can break the package up, get as much as we can now, come back and fight for the rest,” he said, later adding that he would apply the same strategy to his voting reform agenda.

The social spending bill was once viewed as a catch-all home for various progressive priorities, but now Democrats are sensing a need to deliver a solid accomplishment to voters in the midterm year and are beginning to come to terms with a slimmed-down package that can overcome Manchin's reticence.

The White House and congressional Democratic leaders are expected to refocus their attention on it beginning next week, after the all-but-certain collapse of the Democrats' push on voting rights legislation. Talks to craft a new bill that meets Manchin's demands and can garner the virtually unanimous Democratic support needed to pass Congress will likely take weeks.

The Democrats' goal is to have a package - or be on the cusp of one - that Biden can highlight in his March 1 State of the Union address.

If Biden seemed to have one set of regrets so far, it was his inability because of the coronavirus to connect with more Americans outside the capital. He noted that this challenge was most acutely felt by Black voters who wanted him to push more aggressively on expanding access to voting.

“I don't get a chance to look people in the eye because of both COVID and things that are happening in Washington,” he said.

Speaking as Democrats were mounting a doomed effort to change Senate rules to pass the voting measure, Biden said he still hoped that it would pass in some form and wasn't prepared yet to discuss possible executive actions on the issue. The vote spotlighted the constraints on Biden's influence barely a week after he delivered an impassioned speech in Atlanta suggesting opponents of the measures were taking a historical stance alongside segregationists and exhorting senators to action.

Still, he said he understood that civil rights groups were anxious and frustrated about the lack of action, particularly Black voters who question why he didn't press the issue harder and earlier.

There are at least 19 Republican-backed laws in states that make it harder to vote, and Jan. 6 insurrection supporters are filling local election posts and running for office.

It was Biden's seventh solo news conferences as president. The ongoing threat from the coronavirus was evident in the setup of Wednesday's gathering: A limited number of reporters were allowed to attend and all had to have been tested for the virus and wear masks.

The president used the event to pay heed to growing anxiety about rising prices. Staring down an inflation rate that has gone from 1.7% at his inauguration to 7%, he called on the Federal Reserve to lessen its monetary boosting of the economy by raising interest rates, which would in theory help to reduce inflation.

“Given the strength of our economy, and the pace of recent price increases, it's important to recalibrate the support that is now necessary,” Biden said. “Now, we need to get inflation under control.”

Despite it all, Biden said he's convinced the country is still with him - even if they don't tell that to pollsters.

“I don't believe the polls,” he said.