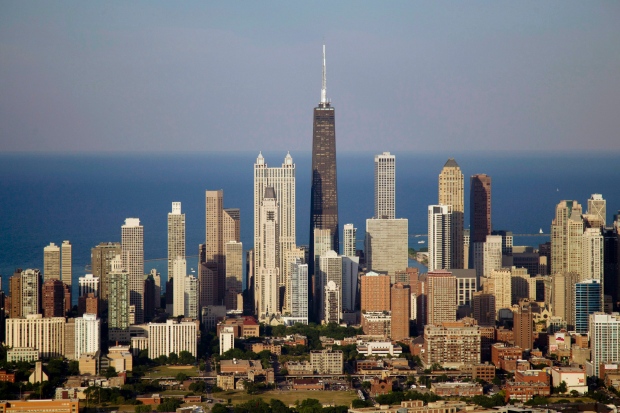 CHICAGO -- Fences are going up, streets are closing down and trim athletes are flying in from around the world ahead of Sunday's Chicago Marathon. But behind the scenes, police are preparing for what will be the most closely monitored race -- the largest marathon in the U.S. since the Boston bombings -- in the city's history.

Police have promised stepped-up security as 45,000 runners get cheered on by more than a million spectators along a 26.2-mile route through the city's neighbourhoods. Officials are mum on details, but more than a thousand uniformed and undercover officers, along with far more bomb-sniffing dogs than in years past, are expected to mix with the crowd.

Inside a command post, officers will be monitoring images coming in from helicopters and some of the city's 22,000 cameras, the most extensive surveillance system in the nation.

"We are going to have eyes on the ground on just about every foot of the marathon route," Chicago Police Superintendent Garry McCarthy said.

Officers will be making more random searches of spectators' bags than they have in the past. For the first time, unattended bags will simply get discarded after they get inspected by bomb-sniffing dogs and are dubbed safe, McCarthy said. Friends and relatives planning to find runners in a designated meeting area will be subject to searches as well.

Runners also will see changes. They will only be able to use clear plastic bags issued by race organizers to store their belongings near the finish line. They also must pick up their own packets, with race bibs and tracking devices, instead of recruiting friends or family.

The days of spectators jumping in to run alongside friends or relatives also could be over. Police said they have never arrested anyone for jumping into the race before, but they warn that arrests are possible this year for anyone who doesn't leave the course when ordered to do so. And the finish line will only be open to spectators with tickets.

That, says runner Stacy Corbett, is a bummer.

"For slower runners like myself, you need the cheering and the pull of the crowd the last two-tenths of a mile, so not allowing spectators to be allowed at the finish is really disappointing," said the 41-year-old Corbett, who was a spectator at the Boston Marathon and was about a block from the second blast.

Runners who jump in to help encourage struggling racers are disappointed but know that Boston changed everything, said Mike Norman, co-founder of Chicago Endurance Sports, which has about 500 people running the race.

"Most of them, even if they're frustrated ... understand," he said Thursday. "They're not getting angry."

But the changes haven't dampened enthusiasm, added Carey Pinkowski, the marathon's race director. "I was at Boston, and by the time we got off the plane coming home runners were coming up to me, saying 'We're coming to Chicago, this is not going to deter us,"' he said.

In the wake of the Boston bombings, which killed three people and injured more than 260 others, the Department of Homeland Security designated the marathon a "level two" event, a notch below massive gatherings such as the Super Bowl. That means more federal agents will be at the marathon, with their own high-tech monitoring equipment.

Neither McCarthy nor Frank Benedetto, the special agent in charge of the U.S. Secret Service who is co-ordinating government agencies assisting Chicago police, would talk about their tactics or strategies.

But security consultant Milt Ahlerich, a retired FBI agent who oversaw security at 15 Super Bowls as the National Football League's chief of security, speculated that most of the work has already been done.

"The good news is that we (law enforcement) know what we have to secure: a 26-mile route," Ahlerich said. "The bad news is, so does everybody else."

Ahlerich said a key component is gathering intelligence before the race, a job that became even more critical after the Boston Marathon.

"You worry about copycats who think if one group of people can do this, maybe they can," he said, adding that he was confident that Chicago and federal officers "have been developing intelligence, what is the chatter, is there someone out there trying to get us here."

Jody Weis, McCarthy's predecessor as Chicago's top law enforcement official and a former FBI special agent, speculated that the FBI was likely reviewing past investigations of people who engaged in suspicious activities or travelled to certain countries or regions.

"They can check to see if anything has happened to the individuals that we might be worried about," he said.

McCarthy wouldn't discuss what intelligence has been gathered ahead of the Chicago Marathon, one of five races in the World Marathon Majors, a two-year cycle of races with a $1 million purse split between the top male and female point earners. Boston, New York, Berlin and London marathons also make up the field.

Chicago's top cop would only say that work was being done.

"We are in touch with federal authorities to ensure public safety," he said. "There are no known threats to Chicago and the marathon at this point."