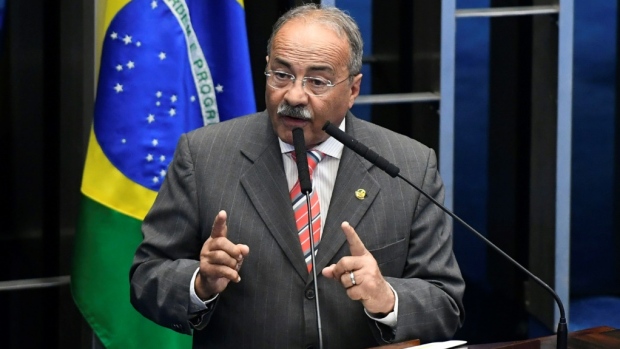 Brazilian federal officers raided the home of Senator Chico Rodrigues as part of a corruption probe, and found 30,000 reales ($5,300) in cash, part of which was discovered in Rodrigues's underwear. (AFP)

SAO PAULO -- A Brazilian lawmaker stepped down from his position representing President Jair Bolsonaro's government and was suspended from the senate, after police searched his house and found cash inside the underwear he was wearing.

Federal police targeted Roraima state's Sen. Chico Rodrigues as part of a probe into the alleged misappropriation of COVID-19 funds, according to the 90-day suspension issued by Luis Roberto Barroso, a justice on Brazil's Supreme Court.

Police initially found 10,000 reais ($1,780) and $6,000 inside a safe in Rodrigues' house Wednesday, at which point the lawmaker asked if he could go to the bathroom, according to the police report, part of which is included in Barroso's ruling. As Rodrigues walked away, a police officer noticed a large, rectangular bulge under the senator's shorts.

"Found inside his underwear, near his buttocks, were stacks of money that totalled 15,000 reais ($2,675)," the report says. The ruling was reviewed by The Associated Press.

Asked three times whether he had any additional cash stowed, the senator angrily shoved his hand into his underwear to retrieve more stacks of bills, which totalled 17,900 reais ($3,200), according to the report.

A subsequent police search turned up another 250 reais ($45) from inside his underwear. There is video of that search, which Barroso wrote in his ruling he was declining to provide to the senate as it was "well within his (Rodrigues') intimate clothing? and could cause ?greater discomfort.?

Barroso wrote that Rodrigues' decision to hide the money indicated impropriety and had raised the possibility of decreeing preventative imprisonment. The senate can vote to reverse the suspension.

"My home was invaded for having done my job as a lawmaker, getting resources for the state to combat COVID-19," Rodrigues said in a statement. "I believe in justice and I will prove that I have nothing to do with any illicit act."

Earlier Thursday, Rodrigues resigned as deputy leader of Bolsonaro's government in the senate, according to the nation's official gazette.

Bolsonaro won the presidency in large part due to his vow to take on crime and corruption. However, his dedication to crimefighting has faced skepticism after his justice minister, Sergio Moro, resigned earlier this year, alleging Bolsonaro had sought to intervene improperly in the federal police. There are also investigations underway that target Bolsonaro's sons, who are lawmakers.

Late Wednesday, shortly before the first news report from online site Crusoe appeared about the police raid on Rodrigues' house, Bolsonaro said he would deliver a kick to the neck of anyone in his government found to be corrupt.

In the capital, Brasilia, Bolsonaro repeated his claim Thursday that his government hasn't been marred by the scandals as have previous administrations. He also said that, unlike ministers and heads of state-owned enterprises, Rodrigues doesn't form part of his government.

"We are combating corruption; it makes no difference who the person is," Bolsonaro said when asked about Rodrigues' case, adding the investigation was a point of pride.

Rodrigues is a member of the joint congressional committee tasked with executing the budget for COVID-19 measures. ------ Biller reported from Rio de Janeiro