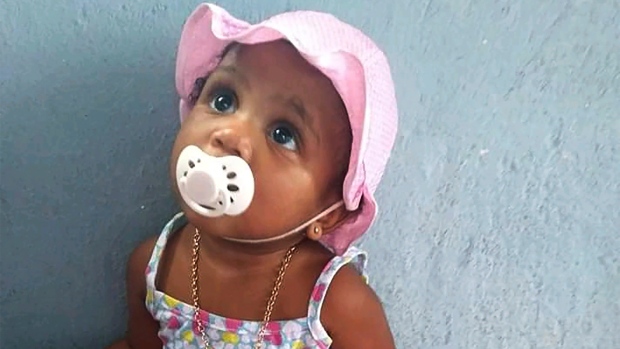 In this Feb. 10, 2020, photo, provided by Andréa de Sousa, her daughter Vitoria Gabrielle looks up while leaning against a wall, in Rio de Janeiro, Brazil. The girl with a constant smile celebrated her first birthday in February, but after recovering from viral meningitis, Vitoria Gabrielle suffered gastrointestinal problems that sent her from her mother's barely furnished hilltop home back to the hospital several times for treatment. It was during an April hospital stay that de Sousa suspects her daughter was infected with the coronavirus that was just starting to circulate in Rio and Brazil. Vitoria Gabrielle died in June. (Courtesy of Andréa de Sousa via AP)

RIO DE JANEIRO -- Vitoria Gabrielle crawled all the time and was starting to walk this year with a little help, hanging on to her 4-year-old brother's arm while exploring her mother's small apartment on a cobblestone street in Rio de Janeiro's working-class Piety neighbourhood.

The girl with a constant smile celebrated her first birthday in February, slept and ate well and was enthusiastically saying her first words: “mamae” and “vovo” (mama and grandma), said her mother, Andrea de Sousa.

But after recovering from viral meningitis, Vitoria Gabrielle suffered gastrointestinal problems that sent her from her mother's barely furnished hilltop home back to the hospital several times for treatment. It was during an April hospital stay that de Sousa suspects her daughter was infected with the coronavirus that was just starting to circulate in Rio and Brazil.

Vitoria Gabrielle died last month - 1 year, 2 months and 21 days after she was born - as COVID-19 cases surged in Latin America's largest and most populous nation, which is now the hardest-hit country globally after the U.S. for virus cases and deaths.

EDITOR'S NOTE: This is part of an ongoing series of stories remembering people who have died from the coronavirus around the world.

Only de Sousa and the child's stepfather were allowed to attend Vitoria Gabrielle's funeral in a cemetery where the gravediggers referred to the child and others recently buried there as “little angels” because their lives were cut short long before they could sin. No words were said at the event, kept brief to avoid more infections; the only sounds were de Sousa's sobs.

“My heart is destroyed with the loss of my daughter,” de Sousa, 20, said later in an interview. “You are not ready to lose anybody but, a child? I'm not used to being without her. I miss her a lot.”

At home these days, de Sousa loses herself as if she were in another world, spending much of her time gazing at a slideshow on her phone of pictures of her daughter set to the song “Law of Life” by Brazilian pop music star Sabrina Lopes.

“Everything that is born, dies. Everything that comes, goes. Today a dream died ... On the road of life, we are passengers. But God protects every extra star in the sky,” Lopes sings.

It was on April 9 when Victoria Gabrielle was admitted to Jesus Municipal Hospital to undergo tests to determine why she had been vomiting.

By April 20, de Sousa said she realized that her daughter was constantly tired and having difficulty breathing, a condition she had never suffered before. The child was put in intensive care on April 24, diagnosed a short time later with the coronavirus and died on May 4.

A death certificate that de Sousa showed to The Associated Press said her daughter's causes of death were “Bilateral pneumonia, infected by COVID-19” along with a buildup of fluid in the brain and swelling of the liver and spleen.

While de Sousa is convinced her daughter was infected at the hospital, Rio's Municipal Health Secretariat said in a statement said it wasn't possible to identify the origin of infection because the virus had been spreading throughout Brazil when Vitoria Gabrielle was infected. The statement added that the child received proper care while hospitalized.

De Sousa said her son, Gabriel, had always been very close to his sister and doesn't understand why he hasn't seen her for so long. He just wants to play with her.

“He asks about her all day. He says, ”Mom, I miss Gabrielle, why is she living with Jesus Christ?“

“I'm asking God for strength and it's not easy,” de Sousa said. “So I'm looking at her photos and I'm really missing her.”