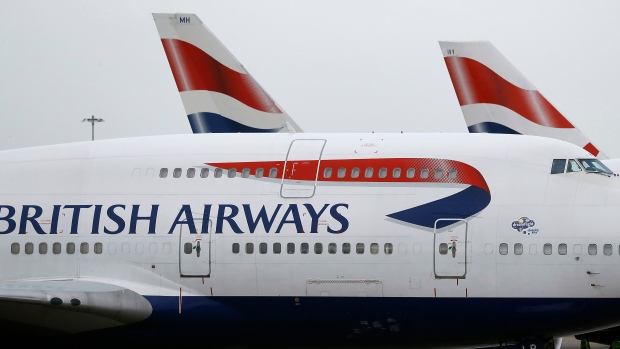 LONDON -- British Airways' parent company said Thursday it will cut flights due to coronavirus travel restrictions and quarantine requirements and confirmed it is raising 2.7 billion euros ($3.2 billion) through the sale of new shares.

International Airlines Group, which also owns the Spanish national carrier Iberia among others, said it will use the money to cope with the economic shock of the coronavirus pandemic. Qatar Airways, which owns 25% of IAG, has undertaken to take its share of the cash call.

IAG also said that short-haul bookings have fallen slightly following the implementation of new quarantine requirements by the U.K. and other European governments for travellers returning from specific countries, including Spain.

As a result, it said it is having to cancel some flights. Overall, it said that between October and December it expects to operate 60% less capacity than during the same period last year, compared with a previously planned reduction of 46%. Budget airline easyJet this week also said it was cutting flights.

Over the past few weeks, British tourists in particular have faced travel chaos after the government took countries off its safe list. The travel advice to the two most visited countries, Spain and France, changed at very short notice, prompting many travellers to seek to return to the U.K. swiftly to avoid a mandatory quarantine period. Earlier this week, seven Greek destinations were taken off the safe list. Further changes are anticipated later Thursday.

The sudden changes have rocked the travel industry, which had been seeking to salvage something from the summer season following weeks of restrictions on pubic gatherings and businesses. Other airlines have also had to cut back on flights, including EasyJet, which earlier this week bemoaned the "unpredictable" restrictions.

"We knew there was little hope of a rapid return to normal, but fresh quarantine restrictions have delayed the long recovery for airlines even further," said Susannah Streeter, senior investment and markets analyst at stockbrokers Hargreaves Lansdown.

IAG reiterated its view that it will likely take until at least 2023 for passenger demand to recover to 2019 levels.

It also said it has reached an agreement in principle with the Unite union over changes to the pay and conditions of British Airways cabin crew, with a ballot expected shortly.

The airline is in the process of reducing headcount by up to 13,000 people, and said that, by the end of August, some 8,236 employees had left the business, "mostly as a result of voluntary redundancy."