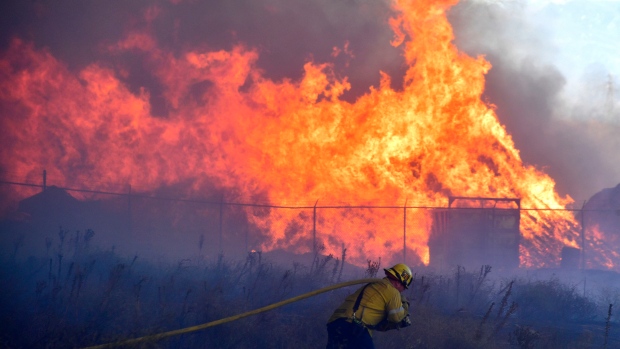 A firefighter pulls a water line as he battles a mulch and pallet fire burning out of control, fanned by Santa Ana winds in and around a recycling yard near Wilson Street and Fleetwood Drive in Riverside, Calif., Thursday, Dec. 3, 2020. Firefighters from both Riverside and San Bernardino County, along with assistance from Colton, Rialto and Riverside City Fire fought the blaze. (Will Lester/The Orange County Register via AP)

The region's notorious Santa Ana winds decreased slightly but red flag warnings of extreme wildfire risk were in place into the weekend because of low humidity. After the weather calms in the southern part of the state, winds are expected to increase in Northern California starting Sunday, forecasters said.

Firefighters were still busy trying to contain a number of blazes south and east of Los Angeles. The biggest began late Wednesday as a house fire in Orange County's Silverado Canyon that spread to dry brush by fierce winds. Some 25,000 people were ordered to flee their homes, although some evacuations orders were later lifted.

The fire grew to 10 square miles (26 square kilometres) and blanketed a wide area with smoke and ash. It was 10% contained as calmer conditions helped hundreds of firefighters who fought the flames on the ground and by air.

Two firefighters were hurt battling the blaze but there was no immediate word on their conditions, fire officials said.

Some residents said they didn't receive evacuation alerts because Southern California Edison had shut off power as a precaution before the fire erupted, leaving them without cellphone service.

The fire was not far from the site of October's Silverado Fire, which also forced thousands from their homes and left two firefighters critically burned.

And to the south, a small blaze in San Diego County that threatened about 200 residences was fully contained Thursday after destroying one home and damaging six others in a neighbourhood near El Cajon.

Numerous studies have linked bigger wildfires in America to climate change from the burning of coal, oil and gas. Scientists have said climate change has made California much drier, meaning trees and other plants are more flammable.

The fires erupted as Southern California utilities cut the power to more than 100,000 customers to avoid the threat of winds knocking down or fouling power lines and causing wildfires - something that has sparked devastating fires in recent years.

California already has experienced its worst-ever year for wildfires. More than 6,500 square miles (16,835 square kilometres) have been scorched, a total larger than the combined area of Connecticut and Rhode Island. At least 31 people have been killed and 10,500 homes and other structures damaged or destroyed.