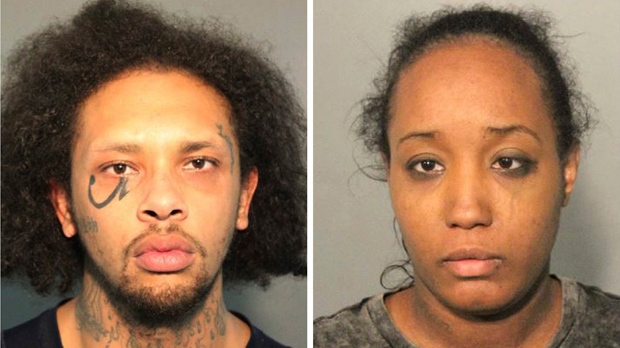 This photo combo of booking mugs provided by the Solano County Sheriff's Office in Fairfield, Calif., shows Jonathan Allen and his wife, Ina Rogers. Police said Monday, May 14, 2018, they had removed 10 children from a squalid California home and charged their father, Allen, with torture and their mother, Rogers, with neglect after an investigation revealed a lengthy period of severe physical and emotional abuse. (Solano County Sheriff's Office via AP)

FAIRFIELD, Calif. -- It's unclear whether any California government agencies had an opportunity to intervene in the years authorities claim 10 children suffered "horrific" abuse inside their suburban home. Their mother told reporters that social services interviewed the kids three years ago but nothing came of the visit.

Ina Rogers, 31, told reporters that she had one prior interaction with child welfare officials when her mother "had mentioned something" that prompted a home visit. Officials took pictures of the children and interviewed them individually, she said.

"Nothing was founded, my kids were placed back with me," she said.

Solano County's Child Welfare Services department officials did not immediately respond Tuesday to request for details about the visit, or information about other interactions they may have had with members of the household.

Sheriff's and prosecutors say the children were rescued from a filthy house in March and had suffered puncture wounds, burns, bruising and injuries consistent with being shot with a pellet gun. Sharon Henry, the county's chief deputy district attorney, said they were tortured "for sadistic purposes."

Their father, Jonathan Allen, 29, was arrested Friday and is in Solano County Jail on seven counts of torture and nine counts of felony child abuse. He has pleaded not guilty and bail was set at $5.2 million.

Allen denied the allegations in an interview with KCRA-TV on Tuesday, declaring "I am not an animal."

"The truth is that it is a functioning household," he said. "Everyone helped everyone. It was a complete circle -- the older ones helped the little ones."

Prosecutors said Tuesday they also would file nine counts of felony child abuse against Rogers at a court hearing Wednesday.

Questions remain as to how the children and the alleged abuse went undetected for years until March 31, when police responding to a missing juvenile report entered the house in suburban Fairfield, California, about 46 miles (74 kilometres) northeast of San Francisco.

They found a home filled with rotted food and human and animal waste, said Fairfield Lt. Greg Hurlbut. Police removed the children, ages 4 months to 12 years, and arrested Rogers on suspicion of neglect. She was released after posting $10,000 bail.

Stories about the alleged abuse came out gradually in interviews with the children over the past six weeks and eight of the children told professionals about incidents dating back several years, authorities said.

Rogers says she home-schooled the children, but the Fairfield home was not registered as a private school and neither were three prior addresses in Fairfield and Vallejo, according to the California Department of Education.

California law requires children to be enrolled in public school unless they meet specific exemptions, such as documented attendance at a private school. Parents who teach their own children can register as a private school but the state does not approve, monitor or inspect them. Some home-based instruction is also offered through self-directed programs at public or charter schools.

Rogers said she previously enrolled her two oldest children in school but decided to teach them herself because she didn't think they were getting enough attention. She said her daughter failed to get on the school bus on her first day of kindergarten and was later found talking to a stranger and his dog at the school, she said.

"They were bullied and the teachers weren't helping me with their education," Rogers said. "So I said, 'OK how am I going to do this with all these kids? I can't do that.' So I was like, 'I'm the only one who cares enough' so I started to homeschool them."

At least one person suspected abuse: The children's maternal grandmother. She called Allen a monster.

"He would take the baby and slap it in the face and put duct tape on the baby's mouth to make it shut up," Wanda Rogers told KNTV in San Francisco.

Rogers said the children slept in one bedroom because they were close. The home's other rooms were used as a master bedroom, playroom and meditation room.

Rogers said she works as an EKG technician at a heart monitoring company and her husband is a tattoo artist.

Neighbour Larry Magnaye said he had no idea there were 10 children living in the house across the street.

The parents waved when leaving the driveway, but he never saw the children in the yard or heard them playing in the backyard pool.

"It's a pretty big house," Magnaye said. "But I don't know how you can keep it quiet when you have 10 kids. I can't keep it quiet with one, two, you know?"