Canadian government: Tycoon in China due to stand trial 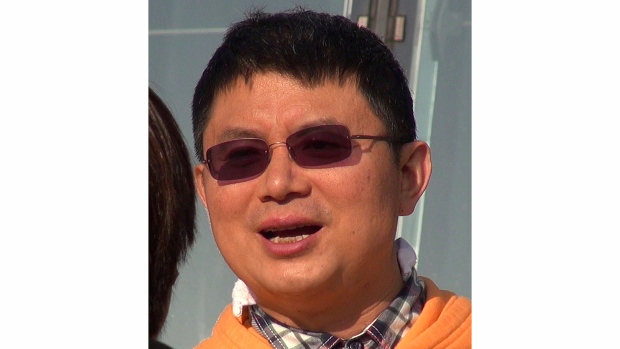 Xiao Jianhua, a Chinese-born Canadian billionaire talks to reporters outside the International Finance Centre in Hong Kong in Dec., 2013. Xiao is being put on trial in China, Canada's government said Monday, July 4, 2022, five years after he vanished from Hong Kong during an anti-corruption crackdown. (Next Magazine via AP, File)

BEIJING (AP) -- A Chinese-born Canadian tycoon is being put on trial in China, Canada's government said Monday, five years after he vanished from Hong Kong during an anti-corruption crackdown.

Xiao Jianhua was due to stand trial Monday, a government statement said. It said Canadian diplomats were “monitoring this case closely” and provided unspecified services to Xiao's family. It said no other information would be released due to privacy considerations.

Xiao, the founder of Tomorrow Group, vanished from a Hong Kong hotel in January 2017 amid an upsurge of prosecutions of Chinese businesspeople accused of bribery and other misconduct. Authorities have never confirmed whether Xiao was detained or disclosed possible charges.

Xiao's disappearance came as the ruling Communist Party was stepping up efforts to pressure people wanted in corruption cases to return from abroad to stand trial. It fueled fears Beijing might be abducting people abroad. At that time, Chinese police were prohibited from operating in Hong Kong, which has a separate legal system.

The government of Chinese President Xi Jinping has tightened control over Hong Kong since then, prompting complaints it is violating the autonomy promised when the territory returned to China in 1997. The ruling party imposed a national security law in 2020 and has imprisoned pro-democracy activists.

In 2015, five people connected with a Hong Kong publishing company that sold books critical of Chinese leaders vanished from the territory and reappeared on the mainland.

Before his disappearance, Xiao had a fortune estimated at $6 billion, according to the Hurun Report, which follows China's wealthy.

An official of China's securities regulator said in February 2017 that Chinese people abroad who were accused of misconduct would be “captured and returned.”

Hong Kong police investigated Xiao's disappearance and said the subject crossed the border onto the mainland. But an advertisement in the Ming Pao newspaper in Xiao's name the same week denied he was taken against his will.