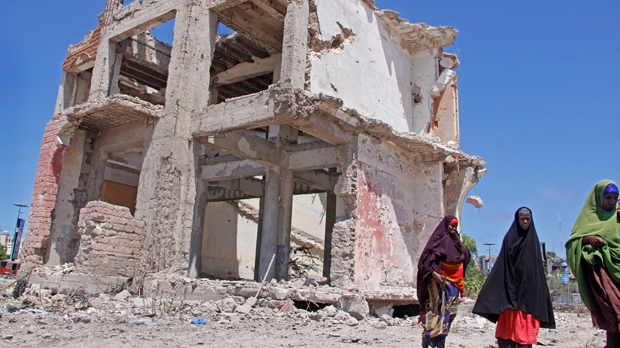 Former foreign minister Hussein Elabe Fahiye, who was an advisor to the current president, was among those killed in the blast. Capt. Mohamed Hussein told The Associated Press another 13 people were wounded and most of the casualties were soldiers.

The car bomb exploded at a security checkpoint near the presidential palace as soldiers were conducting security checks on vehicles on the main road. A white column of smoke rose over the seaside city as gunfire rang out and people scattered.

The al-Qaida-linked al-Shabab frequently carries out such blasts in the capital near the presidential compound and at hotels frequented by government officials and foreigners.

“In the past I was wounded in this area, and again today my daughter has been killed in this attack which also destroyed my home. This is terrible,” witness Madey Ahmed told the AP.

Amid the crumpled vehicles and tangled metal roofing, a small corps of yellow-vested workers carried bodies and began sweeping the dusty street.