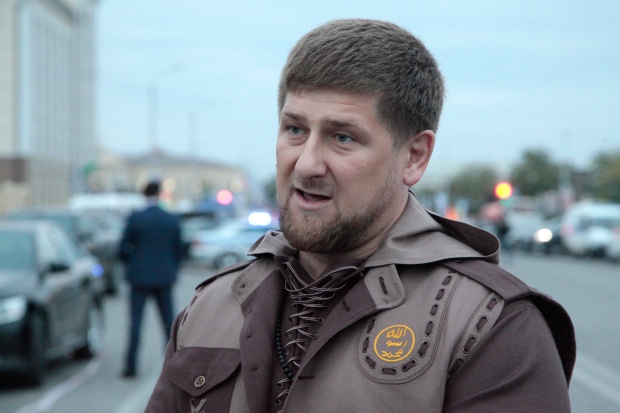 In this Oct. 5, 2014 file photo Chechen regional leader Ramzan Kadyrov talks with the press in the Chechen regional capital, Grozny, Russia. Ramzan Kadyrov’s comments on Wednesday, April 22, 2015 send a worrying sign about a potential rift between him and the Kremlin. The head of Chechnya has allowed local security forces to open fire on federal troops if they operate in the region without his approval. (AP Photo/Musa Sadulayev, File)

MOSCOW -- In defiance of those in Moscow eager to curb his powers, Chechnya's strongman leader told his security forces to open fire on Russian federal troops if they tried to operate in the region without his approval.

Russian law enforcement agencies have been increasingly dismayed by the growing ambitions of Ramzan Kadyrov, who in exchange for the relative calm he has installed in Chechnya after two separatist wars has been allowed to maintain his own feared security forces.

Since taking over after the 2004 assassination of his father, Kadyrov has ruled under the personal protection of President Vladimir Putin. The Russian leader has continued to stand by Kadyrov even as hostility to him grows in some Moscow power centres.

Kadyrov was angered by the killing of a wanted man in the Chechen capital on Sunday in a special operation carried out by federal forces stationed in Chechnya and police troops from a nearby region. He told his men not to allow this to happen again.

"I would like to officially state: Open fire if someone from Moscow or Stavropol, it doesn't matter, appears on your turf without your knowledge," he said in an address to his forces late Wednesday. "We have to be reckoned with."

Kadyrov's private army came under the spotlight last month when a Chechen police officer was arrested as one of the main suspects in the Feb. 27 murder of Russian opposition leader Boris Nemtsov.

Kadyrov praised the suspect, Zaur Dadaev, as a brave soldier and a deeply religious man.

Investigators, however, have been unable to reach his commander, Ruslan Geremeyev, a senior officer in Kadyrov's security forces who is suspected of involvement in the killing. This has raised concerns about Putin's authority and possible future threats to national stability.

Lawyers representing Nemtsov's children said Thursday that they have formally requested that investigators question Kadyrov and several of his closest allies in the murder case.

"The investigators are working and this is good, but on the territory of Chechnya their activities have been impeded," lawyer Vadim Prokhorov was quoted by Interfax as saying. "For example, investigators have been unable to determine the location of R. Geremeyev."

After Nemtsov's killing, some observers speculated that the slaying might have been ordered by Kadyrov's enemies in the federal government in an attempt to force Putin to replace or clamp down on the Chechen leader.

If such a plan existed, it underestimated Putin's reliance on Kadyrov. The relative stability in Chechnya is seen as one of Putin's main achievements, and he sees the burly red-haired Chechen strongman as key to maintaining the status quo.

Putin quickly sent a signal that Kadyrov was safe by awarding him the Order of Honor for distinguished public service.

Kadyrov said Thursday that he was Putin's "foot soldier" and would never question his authority.

"If I am given an order, I will fulfil it 100 per cent. If it is necessary for me to go, I will go. To die, I also am ready," he told journalists in Grozny. "Therefore, to put Kadyrov on par with the president is simply ridiculous. He is our commander in chief."