China rocket taking 3 to space station to blast off Tuesday 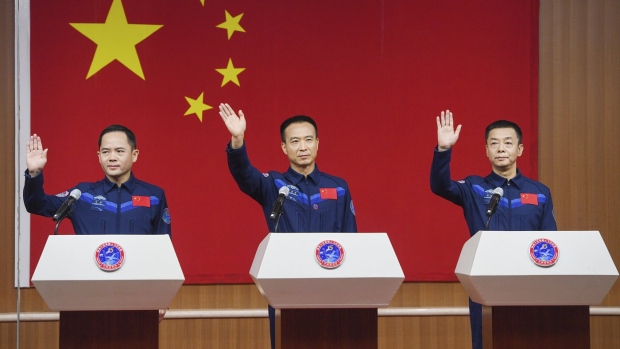 In this photo released by Xinhua News Agency, from left, Chinese astronauts for the upcoming Shenzhou-15 mission Zhang Lu, Fei Junlong and Deng Qingming wave during a meeting of the press at the Jiuquan Satellite Launch Center in northwest China on Monday, Nov. 28, 2022. Final preparations were being made Monday to send the new three-person crew to China's space station as it nears completion amid intensifying competition with the United States. (Liu Lei/Xinhua via AP)

The crew includes a veteran of a 2005 space mission and two first-time astronauts, according to the China Manned Space Agency.

The Shenzhou-15 mission will take off from the Jiuquan Satellite Launch Center on the edge of the Gobi Desert at 11:08 p.m. Tuesday night, the agency said. A Long March-2F carrier rocket, China's standard workhorse for crewed missions, will be used to sling it into space, it said.

The six-month mission, commanded by Fei Junlong and crewed by Deng Qingming and Zhang Lu, will be the last “in the construction phase of China's space station,” agency official Ji Qiming told reporters Monday.

Fei, 57, is a veteran of the 2005 four-day Shenzhou-6 mission, the second time China sent a human into space. Deng and Zhang are making their first space flights.

The station's third and final module docked with the station earlier this month, one of the last steps in China's more than decade-long effort to maintain a constant crewed presence in orbit.

The astronauts will overlap briefly onboard the station, named Tiangong, with the previous crew, who arrived in early June for a six-month stay.

After the Shenzhou-15 spaceship makes an automated docking with the Tianhe core modules' front port, the station will be expanded to its maximum size, with three modules and three spaceships for a total mass of nearly 100 tons, Ji said.

It will also be at maximum capacity for several days. Tiangong has room to accommodate six astronauts at a time and the handover will take about a week. Previous missions to the space station have taken about 13 hours from liftoff to docking.

Next year, China plans to launch the Xuntian space telescope, which, while not part of Tiangong, will orbit in sequence with the station and can dock occasionally with it for maintenance.

No other future additions to the space station have been publicly announced.

The permanent Chinese station weighs about 66 tons - a fraction of the International Space Station, which launched its first module in 1998 and weighs around 465 tons.

With a lifespan of 10 to 15 years, Tiangong could one day find itself the only space station still running if the International Space Station adheres to its 30-year operating plan.

China's crewed space program is officially three decades old this year, but it truly got underway in 2003, when China became only the third country after the U.S. and Russia to put a human into space using its own resources.

The program is run by the ruling Communist Party's military wing, the People's Liberation Army, and has proceeded methodically and almost entirely without outside support. The U.S. excluded China from the International Space Station because of its program's military ties.

China has also chalked up successes with uncrewed missions, and its lunar exploration program generated media buzz last year when its Yutu 2 rover sent back pictures of what was described by some as a “mystery hut” but was most likely only a rock. The rover is the first to be placed on the little-explored far side of the moon.

China's Chang'e 5 probe returned lunar rocks to Earth for the first time since the 1970s in December 2000 and another Chinese rover is searching for evidence of life on Mars. Officials are also considering a crewed mission to the moon.

No timeline has been offered for a crewed lunar mission, even as NASA presses ahead with its Artemis lunar exploration program that aims to send four astronauts around the moon in 2024 and land humans there as early as 2025.

China's space program has also drawn controversy. Beijing brushed off complaints that it has allowed rocket stages to fall to Earth uncontrolled after NASA accused it of “failing to meet responsible standards regarding their space debris” when parts of a Chinese rocket landed in the Indian Ocean.

“In addition to expanding its conventional forces, the PLA is rapidly advancing and integrating its space, counterspace, cyber, electronic, and informational warfare capabilities to support its holistic approach to joint warfare,” the strategy said.

The U.S. and China are at odds on a range of issues, especially self-governing Taiwan, which Beijing threatens to annex with force.