Church looted by vandals as protests rage in Chile's capital 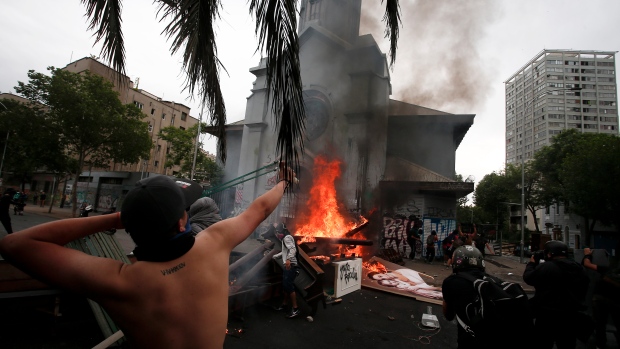 An anti-government protester aims his sling shot at a church after it was looted, in Santiago, Chile, Friday, Nov. 8, 2019. Chile's president on Thursday announced measures to increase security and toughen sanctions for vandalism following three weeks of protests that have left at least 20 dead. (AP Photo/Luis Hidalgo)

An Associated Press photographer witnessed people dragging church pews, statues of Jesus and other religious iconography from La Asuncion church onto the street and setting them on fire in a flaming barricade before they clashed with police.

Ashes spread to Santiago's Plaza Italia square where thousands were chanting and holding banners, while others turned on the lights on their cellphones and waved Chilean national flags. The Chilean capital's mayor estimated about 75,000 people had crowded the square.

Smoke also billowed from the nearby headquarters of Pedro de Valdivia University, which was also looted, though it wasn't clear if protesters started the fire. Authorities said they were still investigating the cause.

Local TV reported attacks on businesses in some areas of the city and said a civil registry had caught fire.

Most of the protests over the past 22 days have been peaceful, but some have turned violent. Some rock-throwing demonstrators have been clashing with riot police, who respond with volleys of tear gas and water cannons.

At least 20 people have died and the Chilean Red Cross estimates 2,500 have been injured in the protests, which also forced the cancellation of two major international summits in Santiago.

The unrest began last month over a subway fare hike with students jumping turnstiles in protest. Demonstrations then erupted into clashes, looting and arson and the movement spread nationwide with a broad range of demands, including improvements in education, health care and a widely criticized pension system in one of Latin America's richest, but most socially unequal countries.

Most demonstrators say they are fed up with the so-called neoliberal economic model that has left Chile with region-topping prosperity along with a two-tiered health and education systems that blend the public and private, with better results for the minority who can afford to pay.

Many Chileans talk of waiting a year for an appointment with a medical specialist, or families receiving calls to finally set up appointments for loved ones who died months earlier. Hundreds of thousands are hobbled by educational loans that can follow them into their 40s and even 50s.

“I'll still be paying my degree ... in 20 or 30 years,” said 28-year-old college student Nicole Munoz, who is studying to become a veterinarian.

As night fell, most demonstrators began to return home, but hundreds of hooded protesters danced in circles around a huge flaming barricade. Police continued to fire tear gas and rubber bullets to try to disperse the crowd.

Friday's demonstrations in the capital began with truck drivers and students protesting against a series of measures announced by Chilean President Sebastian Pinera to crack down on vandals and looting, which some said could exacerbate the violence.

Pinera has also announced economic measures in an effort to contain the protests, but many Chileans say they are not enough, and some are demanding his resignation.

A masked demonstrator carries a statue of Jesus Christ that he took from a church to be added to a barricade, in Santiago, Chile, Friday, Nov. 8, 2019. Chile's president on Thursday announced measures to increase security and toughen sanctions for vandalism following three weeks of protests that have left at least 20 dead. (AP Photo/Esteban Felix)