COVID-positive couple arrested after leaving hotel quarantine in the Netherlands 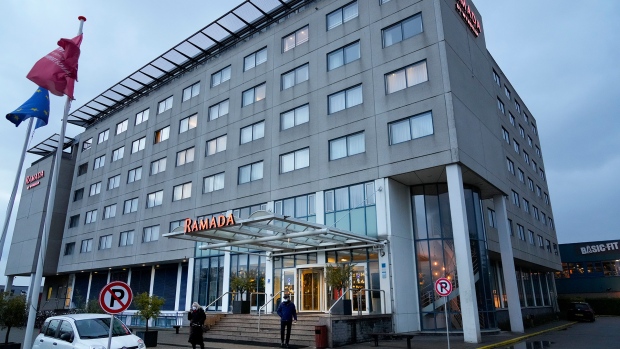 Exterior view of the hotel in Badhoevedorp near Schiphol Airport, Netherlands, where Dutch authorities have isolated 61 people who tested positive for COVID-19 on two arriving flights originating from South Africa, Saturday, Nov. 27, 2021. Authorities are carrying out further investigations to see if any of the travelers have the omicron variant. (AP Photo/Peter Dejong)

THE HAGUE, Netherlands (AP) -- Dutch military police arrested a husband and wife Sunday who had left a hotel where they were being quarantined after testing positive for COVID-19 and boarded a plane to fly home to Spain.

A spokeswoman for the local security authority that covers Amsterdam's Schiphol Airport said Monday that an investigation was underway into whether the couple had committed a crime and should be prosecuted.

“Quarantine is not obligatory, but we assume people will act responsibly,” spokeswoman Petra Faber said. “But there was a couple that wanted to go home and they tried to fly home. The Royal Marechaussee took them off the plane and handed them back to the local health authority.”

When authorities heard the couple had left the hotel, the head of the local security authority, Marianne Schuurmans, quickly signed an isolation order that empowered the Marechaussee police force to detain the couple.

“These people they are now in enforced isolation no longer in our municipality, but in a hospital elsewhere in the Netherlands,” Faber said.

Authorities, citing privacy rules, declined to give more detail about the couple or whether they had tested positive for the new omicron variant of the coronavirus.

The couple had made a stopover in Amsterdam on Friday after returning from a vacation in Cape Town, South Africa, and said they appeared to have been caught up in the improvisation of travel rules that followed news of the new variant.

Carolina Pimenta tested positive for the virus along with 60 other passengers and had remained isolated in a local hotel with her husband, Andres Sanz, the couple told TV3, the regional broadcaster of Spain's Catalonia region where they both live.

Pimenta said that Dutch authorities initially cleared her for travel after three days of isolation, instead of the mandatory five days, because she had already recovered from COVID-19 less than 6 months ago.

But on Sunday she was arrested after boarding the plane that was supposed to take her to Spain.

“We were transparent at all times, I showed all the documents, we entered (the plane) and suddenly they called me and the police very aggressively treated us like criminals when they had given us the go-ahead, all without informing us at all,” Pimenta told TV3.

A total of 624 people arrived at Amsterdam's Schiphol Airport on Friday on two flights from South Africa. Tests showed that 61 of them had COVID-19 and sequencing of samples has so far shown that at least 13 of them have the new variant.

Schuurmans told Dutch broadcaster WNL “it is incomprehensible that people who had tested positive would do this.”