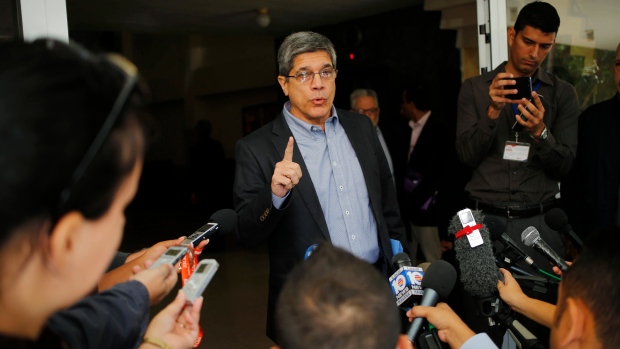 FILE - In this Dec. 12, 2018 file photo, Cuba's Director-General of U.S. Affairs Carlos Fernandez de Cossio makes a statement to reporters, in Havana, Cuba. Cuba’s top diplomat in charge of relations with the United States said Thursday, May 21, 2020 that relations have sunk to a new low, and potentially could sink even lower with the appointment of Florida Senator Marco Rubio as Chair of the Senate Intelligence Committee. (AP Photo/Desmond Boylan, File)

HAVANA - Cuba's top diplomat in charge of relations with the United States said Thursday relations have sunk to a new low, and potentially could sink even lower with the appointment of Florida Sen. Marco Rubio as acting chairman of the Senate Intelligence Committee.

Carlos Fernandez de Cossio decried the absence of any diplomatic outreach after an attack on the Cuban Embassy in Washington D.C. last April 30, and rejected a U.S. government letter that characterized Cuba as being “unco-operative” in the fight against terrorism.

“The current U.S. government, the State Department, the Secretary of State have made it very clear that they have no interest whatsoever to improve the relationship with Cuba,” he said.

The charges made by the U.S. were sparked by Cuba allegedly harbouring several fugitives wanted by American justice, and for providing a safe haven to leaders of a Colombian guerrilla group.

Fernandez de Cossio says that in the case of the leadership of the leftist National Liberation Army, or ELN, Cuba is bound by international guarantees, including a promise to the Colombian government, to provide a safe haven to the guerrilla's while peace talks proceed.

The diplomat says there is little communication between the Cuban government and the Trump Administration on any level, and that the prospect for any discussions are remote.

The Cuban diplomat appeared to hold out hope for change with an upcoming U.S. presidential election, saying a Democratic win could provide a platform for improving bilateral relations.

“Whatever Americans decide has an impact in the rest of the world, and that includes Cuba. Today, one can say that the difference between the positions of the Democratic Party and the Republican Party regarding Cuba is larger than ever before,” he said.