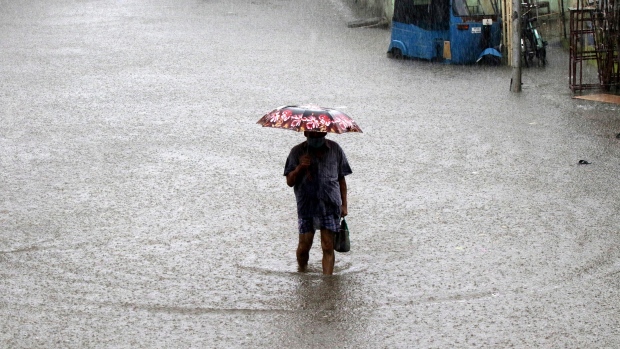 A man wades through a flooded street in Chennai, India, Wednesday, Nov.25, 2020. India’s southern state of Tamil Nadu is bracing for Cyclone Nivar that is expected to make landfall on Wednesday. The state authorities have issued an alert and asked people living in low-lying and flood-prone areas to move to safer places. (AP Photo/R. Parthibhan)

Cyclone Nivar made landfall in Puducherry, a federal territory near the southern state of Tamil Nadu, with winds of up to 130 kilometres (81 miles) per hour, according to the India Meteorological Department. It said the storm was weakening as it moved north toward Karnataka state.

There were no immediate official reports of injuries.

In Chennai, a coastal city of about 10 million in Tamil Nadu, heavy rains flooded streets, knocked down trees and cut power for several hours. Many residential areas were flooded and people remained indoors.

India's National Disaster Response Force said its teams were working to clear the roads after uprooted trees disrupted traffic in some areas.

City officials said the full extent of the damage was not yet known but its impact was mitigated by steps taken by the government.

On Wednesday, tens of thousands of people fled their homes in low-lying areas of Tamil Nadu and Puducherry and moved to evacuation shelters provided by the government to escape the cyclone.

“It's a solace that nothing untoward happened and the weakening of the cyclone is good news,” state minister R.B. Udhayakumar told reporters in Chennai.

Indian Home Minister Amit Shah said authorities were working to get all possible assistance to victims of the storm.

In May, nearly 100 people died after Cyclone Amphan, the most powerful storm to hit eastern India in more than a decade, ravaged the region and left millions without power.