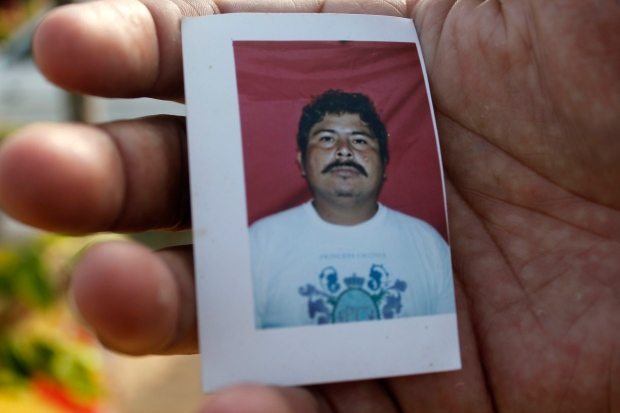 In this Feb. 5, 2014 file photo, an unidentified relative of missing journalist Gregorio Jimenez holds a photo of him outside his home in Coatzacoalcos, Mexico. (AP /Viridiana Zepeda)

VERACRUZ, Mexico -- The daughters of a reporter slain in the Mexican state of Veracruz have told authorities that a woman angered by one of his stories threatened to have a drug cartel kill him.

The statements by Gregorio Jimenez's daughters contradict the official version that the reporter was killed in a personal vendetta related to a relationship gone sour between one of his daughters and the son of the woman accused of ordering his death.

The daughters, Cindy and Flor, said in statements read in court Friday that Cindy had a heated argument about two months ago with Teresa de Jesus Hernandez, a neighbour who was angry about a Sept. 24 story Jimenez wrote about a man getting stabbed outside her bar in Coatzacoalcos, Veracruz.

They said the dispute came to blows and that after their father, a police beat reporter for the daily newspapers Notisur and El Liberal, intervened, Hernandez told him she knew members of the Zetas drug cartel and would hire them to kill him.

"Mrs. Teresa shouted at him, 'Remember the story you wrote. I'm holding on to that. I know the Zetas and I will have you killed,"' Cindy Jimenez said, according to her statement.

Gunmen kidnapped Gregorio Jimenez, 42, from his home in Coatzacoalcos last week. Police found his body Tuesday buried in the backyard of a home in the nearby town of Las Choapas along with a taxi driver and a union leader who was kidnapped in January. He is at least the 12th journalist slain or gone missing since 2010 in Veracruz.

Jimenez had also written about the kidnapping of the union leader, whom he considered a friend, and several of his colleagues have said he was continuing to investigate the kidnapping and they believe he may have been killed to keep him quiet. None agreed to speak on-the-record for fear of their own safety.

Prosecutors in this Gulf Coast state arrested Hernandez and five male suspects, and attributed the killing to a personal vendetta spawned by the falling-out between her son and Flor Jimenez. Prosecutors said the two had dated, an account confirmed by friends of Jimenez's who spoke to The Associated Press.

According to a written confession read aloud in court Friday, one of the suspects told prosecutors that he worked mostly on the orders of the local chief of the Zetas in the south of Veracruz, who had ordered him and his accomplices to kill Ernesto Ruiz Guillen, local head of the Confederation of Mexican Workers, and the taxi driver also found alongside Gregorio Jimenez.

Luis Marquez Hernandez, known as El Pony, declared himself innocent and said he had been tortured into providing the confession that had just been read out loud.

Ruiz Guillen was responsible for collecting dues from petrochemical plants workers in his area, and, according to Jimenez's coverage of his kidnapping, had once been detained for illegally carrying a high-powered firearm.

Jimenez was friendly with him, and often worked taking pictures for money at events Ruiz Guillen organized, one of the slain reporter's colleagues told the AP.

Cindy Jimenez told authorities in the statement read Friday that when her father was grabbed from his home, one of the kidnappers identified him by saying, "He's the photographer."

That has fueled colleagues' suspicions that Jimenez's slaying was in fact tied somehow to the Ruiz Guillen case and not a fight with Teresa Hernandez.