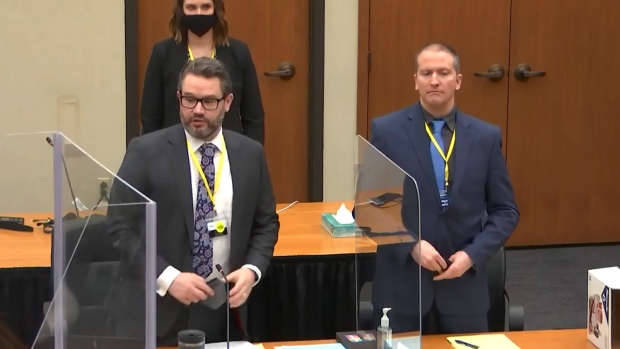 In this image taken from video, defense attorney Eric Nelson, left, and defendant former Minneapolis police officer Derek Chauvin, right, and Nelson's assistant Amy Voss, back, introduce themselves to potential jurors as Hennepin County Judge Peter Cahill presides, prior to continuing jury selection, Monday, March 15, 2021, in the trial of Chauvin, at the Hennepin County Courthouse in Minneapolis, Minn. Chauvin is charged in the May 25, 2020, death of George Floyd. (Court TV, Pool via AP)

MINNEAPOLIS - An attorney for a former Minneapolis police officer charged in George Floyd's death asked the judge Monday to delay the trial, saying the announcement of a $27 million settlement for Floyd's family could make a fair trial impossible.

“I am gravely concerned with the news that broke on Friday,” Nelson said, adding that the announcement “has incredible potential to taint the jury pool.”

Nelson also noted that Minnesota Attorney General Keith Ellison's son Jeremiah sits on the City Council that unanimously approved the settlement, and questioned the timing, though he said he was not making accusations. Keith Ellison heads the prosecution team and often has been present in the courtroom.

During a break in jury selection, Keith Ellison stopped at Nelson's table and said: “Is there anything else anyone would like to not accuse me of?” Nelson looked at Ellison but did not reply.

Mayor Jacob Frey deferred questions about the timing of the settlement to City Attorney Jim Rowader, who declined to comment. Representatives for both said they were following the judge's guidance to not comment on the criminal proceedings.

Prosecutor Steve Schleicher said the state had no control over Frey and the City Council, who announced Friday that Minneapolis had agreed to the settlement that Floyd family attorney Ben Crump called the largest pretrial settlement ever for a civil rights claim.

Absent a delay or change of venue, Nelson urged Hennepin County District Judge Peter Cahill to consider giving both sides extra strikes to remove potential jurors for possible bias, and to recall the seven jurors seated last week to ask if the settlement affected their view of the case.

But Schleicher said those jurors already promised they could decide the case based only on evidence presented at trial and urged the court to “take a step back” and determine whether there's an actual problem.

“You would agree it's unfortunate, right?” Cahill asked.

“It's certainly not my preference, your honour,” Schleicher replied, adding that it was unclear whether the settlement news would “cut” in favour of the prosecution or the defence.

“The problem is, it cuts,” Cahill said.

Cahill agreed to consider the request for a delay, but didn't think it would be appropriate to grant additional strikes to either side. He said he likely would recall the seven previously seated jurors for further questioning though he already instructed members of the jury pool to avoid all news coverage of the case.

He previously denied a request to move the trial, saying coverage of Floyd's death was so pervasive that moving the trial was “unlikely to cure the taint of potential prejudicial pretrial publicity.”

Attorneys must settle on 12 jurors to deliberate and two alternates. At least three weeks have been set aside for jury selection.

Floyd, a Black man, was declared dead on May 25 after Chauvin, who is white, pressed his knee against his neck for about nine minutes. Floyd's death sparked sometimes violent protests in Minneapolis and beyond and led to a national reckoning on racial justice. Chauvin is charged with second-degree murder, third-degree murder and manslaughter.

The first potential juror questioned Monday was quickly dismissed after volunteering that she'd heard about the settlement and presumed it meant the city didn't feel it would win the civil case.

“When I heard that, I almost gasped at the amount,” she said, adding that she couldn't promise she could disregard it.

Potential jurors questioned later didn't mention hearing of the settlement, and neither attorneys nor the judge directly asked if they were aware of it.

At least four potential jurors dismissed Monday said they couldn't be impartial. One said he was “appalled” by the video of the arrest. Another said he was an educator who works with minority families and could not presume Chauvin's innocence, while another said he feared for his family's safety.

A fourth man who was dismissed seemed to know little to nothing about the case. When asked on his questionnaire to describe what he knew, he wrote about an entirely different scenario in which officers went to Floyd's home and shot him after his girlfriend called police.

Attorneys seated two jurors on Monday, a Black man in his 30s who works in banking, coaches youth sports and does creative writing as a hobby and a white woman in her 50s who works as an executive assistant at a health care clinic and sells Pampered Chef as a side hobby.

The man said in his juror questionnaire that he had neutral impressions of Chauvin and Floyd, and didn't believe Chauvin set out to murder anyone. He also wondered why other officers didn't intervene.

“I don't know if he was doing something wrong or not, but somebody died,” the man said. “Even if you have no intention of doing something and something happens, somebody could've still intervened and prevented that.”

The woman said she was “disturbed” by the bystander video showing Chauvin with his knee on Floyd's neck, and couldn't watch the whole thing.

She has a basic trust in police officers, though she recounted witnessing an incident last summer when four police officers responded to a call from a park after a woman yelled at an unarmed white boy. She felt the response was excessive and that police harassed the boy. When told to stay back, she said she felt she wasn't “in any position to argue with an officer.”

She had a somewhat unfavourable view of Black Lives Matter, saying, “All lives matter to me ... we are all important in this world.”

The nine jurors selected so far include six men and three women. Five jurors are white, one is multiracial, two are Black and one is Hispanic. They range in age from their 20s to their 50s.

The earliest opening statements would begin is March 29.

Three other former officers face an August trial on charges of aiding and abetting second-degree murder and manslaughter.