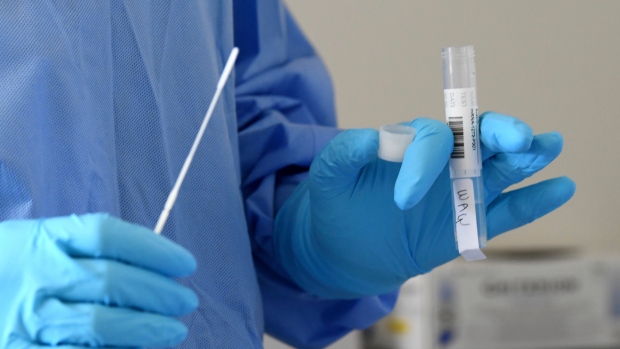 University of Miami Miller School of Medicine nurse Loreta Padron prepares to test a volunteer for COVID-19, Wednesday, Sept. 2, 2020 in Miami. Miami is one of 89 cities around the U.S. that's testing the Moderna COVID-19 vaccine. (AP Photo/Taimy Alvarez)

NEW YORK -- President Donald Trump is escalating his promise for a coronavirus vaccine before Election Day.

But across America, Democrats, independents and even some Republicans do not trust his administration to produce a safe and effective vaccine on such an aggressive timeline. Such hesitancy threatens to exacerbate the public health risk for millions of Americans whenever a vaccine is released.

Should they attack Trump's vaccine claims too aggressively, Democrats risk further undermining public confidence in a possible lifesaving medicine while looking as though they are rooting against a potential cure. But if they don't push back, it makes it easier for Trump to use the real or imagined prospect of a vaccine to boost his reelection campaign.

Washington Gov. Jay Inslee demonstrated the Democrats' balancing act on Friday when asked whether he would be willing to take a vaccine released by the administration before the election.

"If all the protocols had been followed and the evidence is in, of course, I'd follow science. It doesn't matter when it happens," Inslee told The Associated Press. "But I would have to look at the science, not Donald Trump. There isn't one single thing I would ever trust from Donald Trump to be true."

The focus on a speedy vaccine could be overshadowed by a sudden fight over the future of the Supreme Court in the wake of Justice Ruth Bader Ginsburg's death on Friday. But Inslee's comments are in line with a growing consensus of Democrats in leadership positions, including the party's presidential nominee, Joe Biden.

They have repeatedly cast doubt on Trump's promises but pledged to follow the guidance of scientists and health care experts such as Dr. Anthony Fauci, the government's top infectious disease specialist.

Trump restates his promise of an imminent vaccine almost daily.

Trump on Friday promised that 100 million doses of a still-unknown vaccine would be produced by the end of the year and there would be enough vaccines for all Americans by April.

"Three vaccines are already in the final stage," Trump said at a briefing.

"Joe Biden's anti-vaccine theories are putting a lot of lives at stake, and they're only doing it for political reasons," the president said from a White House podium. "It's part of their war to discredit the vaccine now that they know we essentially have it. We'll be announcing it fairly soon."

The first case of COVID-19 was reported in the United States just eight months ago. Health experts, including the administration's own Centers for Disease Control and Prevention chief, -- believe a vaccine will require at least 12 months to 18 months to create because of the extensive testing required to ensure it's safe and effective.

The politics of the coronavirus vaccine are complicated.

Trump has suffered politically from the pandemic, which has devastated the global economy and killed nearly 200,000 Americans, more than triple the number of deaths he predicted in April. But six weeks before the Nov. 3 election, there is a broadening sense from voters that things have begun to move in the right direction -- at least a little -- even as experts warn that it's too soon to believe the worst is over.

At the same time, most Americans worry that the political pressure from the administration will lead the Food and Drug Administration to rush to approve a coronavirus vaccine without making sure it's safe and effective. That includes 85% of Democrats, 61% of independents and 35% of Republicans, according to Kaiser.

"At this point, nobody actually believes it will be ready before the election," said Mollyann Brodie, who oversees public opinion research at Kaiser.

The politicization of such an important health issue has "huge impacts," she said, pointing to the extraordinary challenges ahead for public health officials to persuade as many Americans as possible to take the vaccine whenever it's released.

Democrats facing difficult elections this fall are working to navigate the delicate issue.

California Rep. Ami Bera, one of three Democratic physicians serving in the House of Representatives, said the modest drop in infections from the summer peak does not mean the nation has turned the corner, as Trump has suggested.

He said a vaccine is critically important and welcomed one as soon as possible, as long as it's deemed safe by science.

"I don't have any vaccine hesitancy. I know the immense power of vaccines. We are going to need a vaccine. I have no issue with taking a vaccine," Bera said.

But he offered a warning: "Trust the scientists. Trust the doctors. Don't trust the politicians."

On Capitol Hill, Democrats are sticking with a simple, consistent message pushing for a vaccine as soon as possible, but not a moment earlier. House Speaker Nancy Pelosi, D-Calif., on Friday praised the FDA scientists and researchers helming the vaccine initiative, but she has been highly critical of the Trump-appointed FDA commissioner.

"We all hope and pray for a vaccine, and that will make a tremendous difference," Pelosi said.

Still, it's far from certain that all Americans will take the vaccine when it's available.

Only about half of Americans say they would definitely or probably get a vaccine if it were available to them today, according to a poll released by the Pew Research Center this past week.