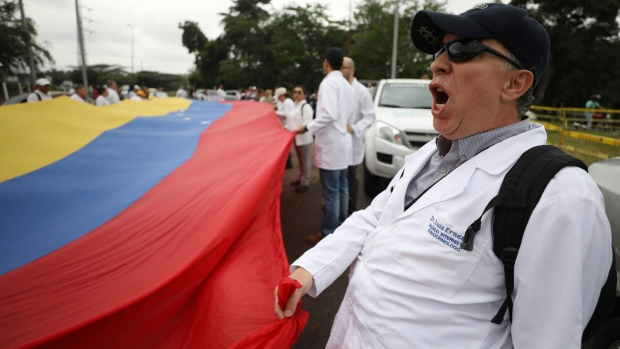 Venezuelan doctors shout slogans against the government of Venezuela's President Nicolas Maduro at the International Bridge Tienditas, which has been blocked by the Venezuelan military, near Cucuta, Colombia, Sunday, Feb. 10, 2019, across the border from Tachira, Venezuela. (AP Photo/Fernando Vergara)

CUCUTA, Colombia - Venezuelan doctors protested Sunday at the entrance to a bridge blocked by their nation's military to demand that humanitarian aid be allowed to enter, as opposition leader Juan Guaido acknowledged the conflict over the food and medical supplies could lead to clashes.

Carrying a giant Venezuelan flag, about two dozen doctors in white coats called on the military to remove a tanker and two cargo containers blocking the Tienditas International Bridge where humanitarian aid provided by the United States is being stored.

The doctors protested on the Colombia side of the border, saying they would face repercussions for holding a similar demonstration on the Venezuelan side.

Dr. Katia Diaz, a psychiatrist, said that each day aid sits waiting for transport into Venezuela represents one more day in which patient lives are at risk.

“Those containers represent the arrogance of a dictator,” she said. “It lays bare the lack of humanity, of compassion for the pain of our people.”

Guaido, the leader of the National Assembly who four dozen nations are recognizing as Venezuela's rightful president, urged the military to think carefully about how they will proceed. Attending a church service Sunday with his family, he recognized that the feud between those who do and do not want the aid to be let in could lead to clashes.

“It depends on you,” he said to the military. “We're not talking between the lines. We're talking clearly and decisively, giving an order to the armed forces: To allow the aid in.”

President Nicolas Maduro has vowed not to let the supplies pass, saying Venezuela isn't a nation of beggars. He contends the food, hygiene kits and emergency medical gear are part of a larger ploy by the United States to remove him from power.

The U.S. provided the aid and the Colombian government helped ensure its transport to the border, but the opposition is charged with handling the aid's distribution within Venezuela. They have not yet announced how they plan for the aid to enter if the military does not consent.

Guaido declared himself Venezuela's interim president before masses of cheering supporters in late January, arguing that under the constitution he should become chief of state because Maduro's re-election was a sham.