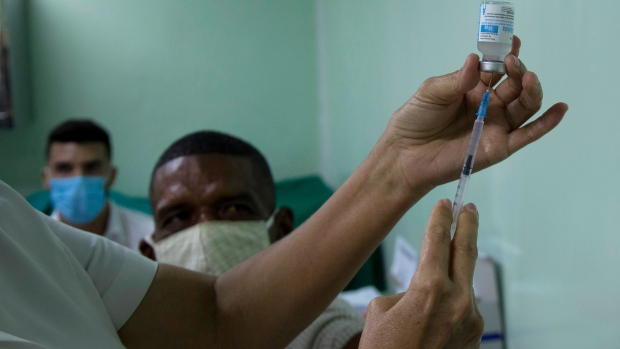 Eusebio Torres waits to be vaccinated as a nurse prepares the dose of the Cuban Abdala COVID-19 vaccine at the Gustavo Aldereguia hospital in Cienfuegos, Cuba, Sunday, May 30, 2021. (AP Photo/Ismael Francisco)

HAVANA, Aug 18 (Reuters) -- Several doctors in Cuba have taken to social media to decry shortages of medicine, oxygen and other materials needed to battle a dire COVID-19 outbreak, in a rare public denunciation of conditions in the island's hallowed healthcare system.

The outcry comes in reaction to comments by government officials that the doctors say scapegoat medics for the country's worsening plight while downplaying precarious conditions pre-dating the current crisis.

"I want to denounce the collapse of our health system in our hospital as well as in the rest of the country, due to a lack of resources and protective gear," said Dr. Francisco Pavon in a video shared on social media, featuring more than 20 doctors and medical students in the eastern province of Holguin.

Others took to Facebook or messaging platforms to denounce the critical situation and demand more support from authorities.

Similar criticism has been seen elsewhere globally during the pandemic as medical staff have reached a breaking point when infections have ballooned, overwhelming even the richest of healthcare systems.

But in Cuba it is unusual, as authorities often restrict public dissent, saying unity is necessary to combat open U.S. attempts to force political change.

And the topic is especially sensitive: healthcare is considered one of the pillars of legitimacy of Cuba's "revolutionary" one-party system, having produced results on a par with rich nations.

Cuban President Miguel Diaz-Canel acknowledged last week the healthcare system was overwhelmed. Cuba currently has one of the highest caseloads worldwide. The government has blamed tougher U.S. sanctions for worsening shortages on the island and slowing the roll-out of home-grown vaccines.

But doctors' complaints have exposed simmering resentment over how rundown Cuba's healthcare system was even before the pandemic, with many blaming economic mismanagement not U.S. sanctions, as well as low salaries and other labor issues.

Coming a month after unprecedented nationwide anti-government protests, rights activists say it is another sign Cubans are losing their fear of speaking up despite the risk of reprisals, like losing their job or being expelled from university.

The growth of internet access in Cuba, providing virtual forums to share gripes and mobilize, has been key, they say.

Diaz-Canel blamed last month's protests on the United States, accusing Washington of fomenting dissent online. But he also signaled he was open to reforms and a re-evaluation of Cuba's economic policies.

While state-run media have published few details of Cuba's COVID-19 crisis, reports of incinerators breaking down due to excess corpses or deaths due to a lack of oxygen have been emerging in provincial outlets in the worst-affected provinces and on social media.

But Prime Minister Manuel Marrero said he had heard more complaints during a visit to the central province of Cienfuegos about "mistreatment and neglect" by doctors than about scarcity.

That, and statements by other officials alluding to doctors not showing up at their clinics or taking holidays in the middle of the crisis, proved to be the straw that broke the camel's back for many overworked doctors.

"Shame on you for criticizing those on the front lines," wrote Marian Vasquez, 23, a doctor and trainee-surgeon at the main Cienfuegos hospital, on Facebook. "It's time you did more and criticized and lied less."

The country has long prided itself on having one of the highest ratios of physicians per capita, but many are deployed overseas. Now, the country is bringing hundreds back.

"Why the closed door meetings. Why did you not meet and dialog with those on the ground?" asked Miguel Angel Gonzalez, a doctor in Cienfuegos, chiming in with growing accusations among Cubans that government officials are out of touch with the people.

He said the medics had hoped officials might be able to explain how they were supposed to work without enough equipment to do chest x-rays for all the patients in intensive therapy or the reactives to conduct basic tests.

Government officials this week moved into damage control mode, underscoring their gratitude for the work of doctors and their efforts to increase oxygen supplies.

"What we have most proven in this time is the patriotism of our people, the healthcare staff, scientists. Working full time in complicated situations," wrote the president on Twitter. "Thanks to all!"

Wearing a white doctor's coat, stethoscope around his neck and face mask, one doctor in the video, Rafael Alejandro Fuentes, said he was afraid, not of the pandemic, but of how government would interpret them "demanding (their) rights."

State media said on Tuesday Cuba was updating its telecoms legislation to outlaw certain behavior on social media like publishing "false news, offensive messages or defamation with impact on the country's prestige."

Cuba says it has the right to defend itself against U.S.-backed counterrevolutionaries seeking to overthrow it. However, some doctors saw this as an attempt to muzzle them and other critics. Access to internet and social media was also heavily disrupted in the weeks following the July 11 protests.

"We could not speak in public spaces," said one doctor working at a COVID-19 isolation center, on condition of anonymity. "Now we can't do it over the internet."